Theatre Review: ‘Bully’ by The Interrobang Theatre Company at The Strand Theater 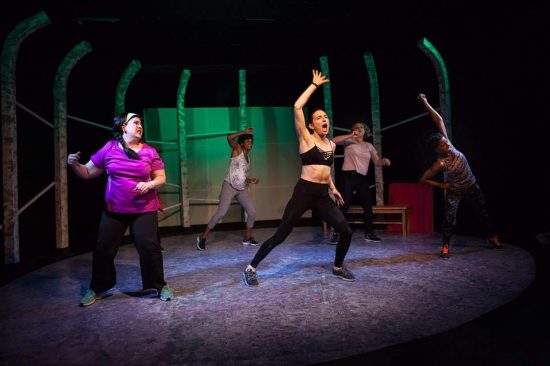 It’s every nightmare I have ever had when attending a group exercise class. This play was physically and mentally stimulating and draining all at the same time. 90 minutes that will keep you glued to your seat.

Amina Henry’s “Bully” hit the stage at The Strand Theatre on Thursday and it was one of the most thought provoking plays I have seen this year. Think about yourself when you use the words “ I am” what follows the I am will always come looking for you. “ I am old” wrinkles will come looking for your face, ” I am overweight” run! Those calories will find you. Just one of the many great lines in this show that will take you on a rollercoaster of emotions.

….a rollercoaster of emotions….

So what is the play about? Well, it flirts around the topic of fitness, self-loathing, bullying, revenge, and throw in a little sexuality confusion. The show is about self-awareness and our self-image. The thought of seeing others happy when we are not happy with ourselves turns these women into fighting machines. There are lots of violent scenes, and while the end is a little weak in respect of being almost unfinished, overall there is a lot to take away from this play showing what we learn in our youth or how we are treated in school stays with us forever, sometimes to our detriment.

Anna Lynch plays the terrifying and slightly insane fitness instructor Wren. (I will tell you that she reminds me of a fitness instructor I had in Los Angeles she was terrifying, but boy was I fit at the time— out of fear!) Lynch leads these fitness classes and the women in it like a military maneuver. I was exhausted after watching her rally up her soldiers, while she may look like she has the perfect body she suffers with self-loathing and self-image issues. A very strong and convincing performance.

Roxie Johnson plays Bree, the first woman to fall victim to the exercise class thugs! (All will be revealed) Johnson plays the victim well, seeking revenge on her attackers while walking the audience through her post-traumatic stress after her attack, turning to alcohol and food to feed her feelings.

Billie Krishawn plays Candace the bubbly and somewhat annoyingly needy but adorable character. Krishawn’s moment to shine was her speech about the lack of food she had as a child – lots of tea – but small amounts of food. Her mother’s belief that she would be fat has affected her as an adult. She brings lots of high pitched light-hearted moments to a sometimes dark script.

Heather Johnston plays Delilah the somewhat shy character. You know the one? The girl who always stands at the back of the group exercise class with her head down hoping no one notices her. She carries with her a nervous energy but beware when she decides enough is enough and decides to lash out stand back! She tells of her days at school being bullied all while devouring a box of donuts.

Eirin Stevenson plays Tanisha she is one of the partners in crime to the evil self-loathing fitness fanatic sadist that is Wren. Stevenson is ‘that’ chick in the class you one the one? Striving to keep up with the instructor on so many levels. She doesn’t seem to act quite so severe when the tables are turned on her behavior. Another strong character who hold her role throughout.

Meghan Taylor plays Simone a character who adds lots of light-hearted moments to this often dark and thought provoking play. During one scene when the ladies are heading out to find their next victim, Taylor jams away to tunes on the radio replacing the lyrics with her favorite foods such as — ‘I will always love chips’ she is both hilarious and sorrowful.

If you attend a group exercise class there is at least one character you will relate to on stage.

The set was simple and well lit adding to the drama and emphasizing well the location changes within the play. Kudos to the ladies for such an exhausting performance with choreography by Caitlin Bouxsein and shadow movement by Caitlin Rife. I wasn’t sure how the shadow boxing fitted in with the plot, but it was well executed but there was a lot to absorb and it is well worth a second visit. Brad Norris did a great job with the fight choreography – I was scared it looked very real.

“Bully” plays through June 18, 2017 with Interrobang Theatre Company currently at The Strand Theater in Baltimore.  Tickets are available for purchase at the door or in advance online.