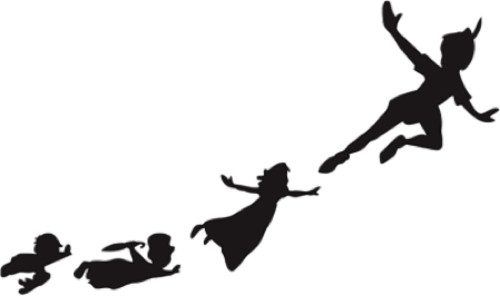 I loved watching Mary Martin in the “Peter Pan” musical as a child. In the early days of VCR, this was one of my favorites to watch and re-watch, so what fun to see it performed live by Charm City Players in Baltimore, MD on Saturday, July 1, 2017.

…a fun adventure into Never Never Land that children and parents will enjoy together.

The play is performed in The Harry and Jeanette Weinberg Auditorium at Mercy High School, so free parking is plentiful and the theater has stadium seating, which is especially helpful for the many children who were in the audience, as no one “tall” could block their vision.

The lobby was thematically decorated with pirate chests and treasures and the costumed characters from the play walked around pre-show to interact with the audience and staff the various activity tables. Pirate hats and fairy wands were for sale and there was free face painting and craft activities available.

“Peter Pan” tells the wondrous tale of a young boy determined to “never grow up!” Peter (Hannah Thiessen) lives in Never Never Land with his fairy friend Tinkerbell, whose fairy dust allows him to fly all the way to London to hear the wonderful stories that Mrs. Darling (Elton Elizabeth Knupp) tells to her three children every night – Wendy (Acey Doak), John (Logan T. Dubel), and Michael (Parker Stephen Napp).

I enjoyed Knupp as Mrs. Darling, especially on the sweet round “Tender Shepherd” that she sings with the three children. Her voice was beautiful. The children also had very nice singing voices and they blended well with each other. Dubel as John, while having few lines throughout the play, brought a lot to his character with his many varied facial expressions throughout the show, especially when he is worried about Michael.

Doak as Wendy was much friendlier and kinder than the Wendy I remember from the Mary Martin version and I thought that was a very nice interpretation of the role. For instance, she didn’t get jealous of Tiger Lily (Chelsea Hines) and she didn’t come across as arrogant. Her British accent was well done throughout the show.

Hines also gave a good performance as Peter’s frenemy Tiger Lily, leader of the “Indians.” I do have to caution that as this show is based on J.M. Barrie’s 1904 play, there is some potentially offensive stereotyping of Native characters written into the script, but perhaps parents can turn that into a learning opportunity for a good conversation with their children before and after the show. I felt that the production strove to be as respectful as possible given the unalterable material they had to work with.

Thiessen as Peter Pan gives a wonderful performance. She was brash and arrogant (which Peter is supposed to be!), sometimes frustrated and childlike, sometimes despondent, and sometimes full of fun and energy. Her acting was a highlight of the show and yes, she really flies, which is a lot of fun for the audience to watch!

Captain Hook was played by Gregory Mank with lots of swagger and ridiculously overdone rolled r’s. His singing was strong and dramatic. The Lost Boys all did a good job with their energy and facial expressions and the Indian tribe did well with their choreography. Chris A. Lange as Smee was enjoyable as he endlessly tried to placate and assist Captain Hook.

The costumes designed by Christina Napp were perfectly reminiscent of the animated Disney movie, from Wendy’s blue nightgown with sash and hair ribbon, to John’s striped pajamas and Michael’s onesie. I especially enjoyed Peter’s costume with green netting that added a nice touch to the top. Captain Hook’s outfit was also very fun, with the gold-trimmed coat and luxurious Louis XIV styled clothes.

I recommend “Peter Pan: The Musical” as a fun adventure into Never Never Land that children and parents will enjoy together.

Advisory: While the killing of various characters is threatened or appears to happen at various points throughout the show, no one dies except Captain Hook (and it happens off-stage). Parents may want to advise younger children ahead of the show if they could potentially be upset.