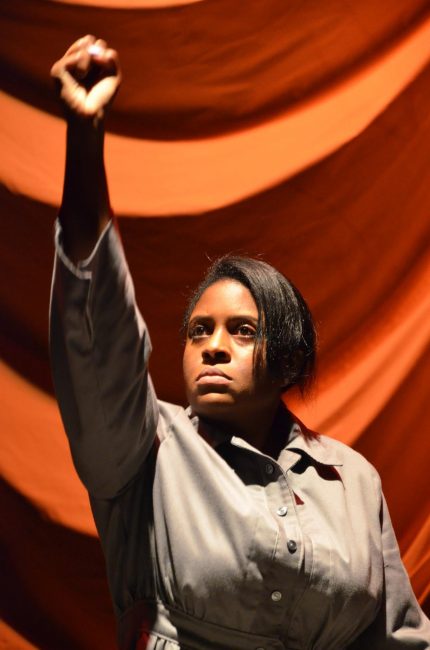 From “Variations on Magic” by Rapid Lemon Productions. Photo courtesy of RLP.

Do you believe in magic? I do.  Alacazam. Hocus Pocus. Abracadabra. What’s magic really and how does it make you feel when you hear the word? Is there a memory that settles in you reminiscent of childhood? Is it the return of the dead? Do you think of spells, lucky charms, and your favorite Disney movie? Or do you think of ghost, goblins and a witch’s brew? Do you think of the many women who died for their incomprehensible gifts, or the many women who use their kitchen as an office for healing even still till this day? What is magic really? Well if you’d like explore it and all its variations in one night, this is the show to see.

“Variations on Magic,” presented by Rapid Lemon Productions, is a dozen local playwright’s ten minute plays fused together by one theme, MAGIC. I imagine that the order in which they told the stories was highly important, and I have to say the lineup director Lance Bankerd chose was quite brilliant.

While the dozen plays I saw in one night were all very different  there were a few that I took home with me. A few that settled in my skin and left a mark on me. The ones that truly captured what I think when I hear the word magic. I’m sure you’ll find the ones that resonate with you.

“Running Interference” by Amy Bernstein was a hilarious play about a “witchy” mother in law, Calista  (Mia Robinson) who was slowly but surely using her abilities to dispose of her adopted son’s girlfriend, Winnie (Chara Bauer). Calista drove Winnie nearly insane and I chuckled quite a bit as her son,  (Chad Short) set there oblivious to his mother’s magical powers. Might I also say that Chad Short made me weak with laughter as his subtle choices of oblivion made my night.  Carly Shiners choice of lighting was a powerful touch to the short tale. I’d like to see more of Calista’s Trickery to come.

“In a Bottle” by Justin Lawson Isett gave me chills. The timing and movement added to the magic of a really phenomenal story about a woman wanting escape the unimaginable pain of losing the love of her life by visiting a root worker to make her memories disappear. I cried. I tingled. I empathized. I did all the things a great play makes you do, but in ten minutes. It was extremely well written and the pace added volumes to the writing. I left feeling like I needed to know more about these people.

“The Trial” by Jeff Dune hit home and Mia Robinson who is the exceptionally gifted actress who played Mary, the accused, delivered a monologue that gave me chills. Her defense would have put attorney veterans to shame as she played a woman put on trial for practicing magic. Her argument made me think of how we tend to judge what cannot be understood. How we sit with biased perspectives on life that prevent us from reaching our maximum potential because we fear the unknown.  This trial had my brains swirling trying to think of the blockages that might exist in my life because of emotions like fear or the inability to completely understand or even try to understand things that make me uncomfortable. The play was phenomenal in a way that made me shiver and empathize with all those women exercising their natural abilities and being condemned for it and forced gifted women to operate in secret as opposed to training others to grow in the gifts they obtained. “What is Magic?” She asked, over and over again in a way that made me ask myself. For me, magic is speaking what I want and watching it float into my existence. Go and explore your thoughts on magic. Checkout a really great play full of life, layers, laughter and a really really good time.