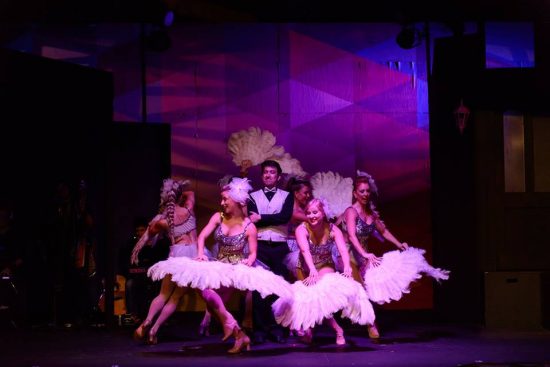 The stars and the stage lit up on Friday night as the cast of “Light Up The Stars” took to the stage in the state capital. An enjoyable evening of familiar songs as the cast led me on an enchanting musical journey through the musical decades. The show is part of the theatre’s ‘Power up’ campaign and cleverly uses light bulb props to convey a message throughout the show. I don’t want to give too much away.

The theater is raising money through this campaign to upgrade from residential to commercial power. An essential move to replace aging electrical systems and ensure the safety and longevity of the updated electrics.

This show had so many of my personal favorites from musicals over the years and some I had yet to see. So “What the hell are musicals?” an appropriate line to kick off the show as Corey Jeweler and Jason Vellon along with the full cast sing gloriously through “A Musical” from “Something Rotten.” The lyrics to this song are hilarious, and each comedic line was delivered well with perfect timing.

So much energy and talent on stage bringing songs from the musicals both old and new.

Throughout the entire show, the five-piece band are on stage and play many of the show numbers others are on pre-recorded backing tracks—I suspect either as they are full orchestrations or it could be a copyright issue on obtaining the sheet music. Either way, there is no loss of skill, sound or talent when the band strikes up!

Soloist Ashley Gladden has the voice of an angel as she wowed the audience with her rendition of  “Summertime” from “Porgy and Bess,” clearly a classically trained singer. What a great asset to the community theatre.

Andrew Gordon and Debra Kidwell glided onto center stage and danced delightfully through “From this Moment On” from “Kiss Me Kate.” Gordon is tall, debonair graceful, precise and elegant in every move – a talented performer. Kidwell also a great asset to the show with her grace and abundant energy.

The boys took to the stage next in “Brotherhood Of Man” from“How to Succeed in Business.” Nathan Bowen, Peter Crews, and Katie Gardner (sorry Katie), Katie joined the boys and the male cast on stage and knocked this song out of the park. Gardner a dynamic singer and performer versatile enough to work in both male and female dominated numbers.

Jake Wernecke hit the stage next with “All Good Gifts” from “Godspell” – a young man with a well controlled and pleasant voice.  Kristi Dixon did a good job performing a ballet solo through this number although I thought the choreography didn’t quite live up to her potential as a dancer.

If you have a weak heart – brace yourselves! Up next came the sexiest cell block vixens outside of Chicago with the “Cell Block Tango” from – of course, “Chicago.” Wow! These ladies looked amazing and sang well; I wouldn’t mess with these deadly divas! Ashley Gladden, Lacy Comstock, Amanda Cimaglia, Caitlyn Ruth McClellan, Jennie Young and Katura Inscoe– truly worthy of a Broadway show. He may have “had it coming” ladies, but you have it going on! McClellan also performed “Spark of Creation” from “Children of Eden.”

Vincent Musgrave didn’t light up the stars he blew them away with his rendition of “Stars” from “Les Miserables.” There is so much energy from this cast of performers as they hit the stage with “Dancin Fool” from “Copacabana.”

Peter Crews, Kevin Cleaver, Nathan Bowen and David Merrill took to the stage with the world’s largest plungers and impressively danced and sang around them – almost flawlessly. It seemed as if the briefly misguided plunger at one point was almost part of the show. It was in the wrong place at the wrong time, but it was hilarious to watch – great job.

Next came the foot tapping renditions of “Johnny B. Goode” from “The Buddy Holly Story” followed by “Down by the Riverside” and “Blue Suede Shoes” from “Million Dollar Quartet” showing the versatility of the guys. Brian Krazewski plays guitar and sings, multi-talented.

Once again the ladies hit the stage singing “I’m a Woman” from “Smokey Joe’s Café” and wow another great song Kristi Dixon showing off her voice this time after an earlier dance solo.

“Jail House Rock” from “All Shook Up” concluded the first half of the show, and there was so much more great to come.

It’s true what they say “It Don’t Mean a Thing if it Ain’t Got that Swing” from “Swing” – a great way to kick off Act II.  Jeweler showing again his rich controlled voice.  Also from “Swing” came “All of Me” a duet performed by Katie Gardner and David Merrill. Well choreographed and delivered.

Kevin Cleaver hit the stage with “ This is the Moment” from “Jekyll and Hyde,” not an easy song to pull off followed by “Say it Somehow/Light in the Piazza” from “Light in the Piazza” delightfully sang by Gladden and Merrill, their voices work well together on this song.

Fred Fletcher Jackson is not only hilarious but also very talented as he sings and acts his way through “You Won’t Succeed On Broadway” from “Spamalot.” “How About a Dance” from “Bonnie and Clyde” gave us a well-delivered solo from Katie Gardner and a dancing duet with Andrew Gordon and Amanda Cimaglia. Gordon adapts well to various dancing styles and partners.

Then to a musical, I am excited to see later this year – “Newsies.” The cast performed “Seize the Day” making me want to see the show more than ever. “I Believe” from the “Book of Mormon” no easy task to take on, but it was performed well –followed by “My shot” from “Hamilton” showing the diversity vocalist Cory Jeweler. The cast also did a great job changing from jazz hands to street dance on this number.

Next came “For Good” from “Wicked,” “You will be Found” from “Dear Evan Hansen” leading to the final song of the night which I think sums up this night for me, “Oh! What a Night” from “Jersey Boys.”

So much energy and talent on stage bringing songs from the musicals both old and new. A fun night!

The sets were simple and worked well with the large cast making it easy to move around the stage. The cast often using the higher tower area on stage to add dimension. Lighting is a big deal for this show considering the reason for the show and well the title. Not always easy to light an outdoor venue but this lighting team always impresses me in creating dynamics and mood at the right moment. So many fun costumes in this show, kudos to Miriam Gholl in finding a costume for so many different numbers from various eras.

The weather was perfect for an evening under the stars at one of my favorite theatre locations in Annapolis.

“Light Up The Stars” at Annapolis Summer Garden runs through September 24. You can check out the website HERE for show times and tickets.