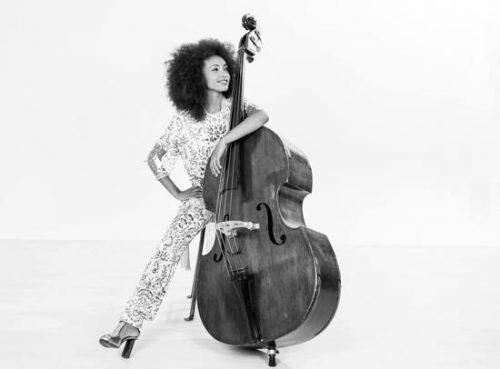 Violet curtains set behind hanging lights that held a gentle glow. It was somewhat enchanting as I walked in to find my seat in the Joseph Meyerhoff Symphony Hall. I wasn’t quite sure of what awaited us, as I set and skimmed through a very brief program that spoke more about Mozart than the featured artist, Esperanza Spalding. However, it was still her face that graced its cover. I was dying to read about the talented musicians I knew would accompany her and more about what was next on her journey, but there was nothing there.  As Conductor Nicholas Hersh made his way to the stage,  he walked up to a microphone to speak. In all honesty, this is something in all my years of attending the Baltimore Symphony Orchestra, I’ve never witnessed. As a matter of fact, I’ve never even heard a conductor speak on stage before that day. While I welcomed the change, I have to admit I was a little confused.

It was like we had a front row seat at an Esperanza Spalding private jam session. It sounded like freedom, and her freedom made the listeners feel free.

As he took the Microphone he asked, “ For how many of you is it your first time here? By a show of hands.” As less than about 30% of the audience raised their hands, I had a feeling that things were going to be different than many of my previous experiences with the BSO. As they made their way through Mozart: Serenade in B-flat Major “Gran Partita: movement 1,3,6, 7, 8, Hersh explained the history between and sometimes even during each of the movements. This was interesting, but it also sort of distracted me from the experience.

Although I didn’t think of it as an ideal choice, the knowledge-hungry nerd in me enjoyed learning more about Mozart and listening to the passion in Hersh’s voice as he shared. However, I have to admit  I wasn’t expecting Mozart 101 before I came. I honestly really wanted to hear the Baltimore Symphony Orchestra step away from the traditional just for one night.  But, you can’t not love the Baltimore Symphony Orchestra. It is filled to the brim with talent, and I often find myself in a dream state whenever I attend. And in the words of conductor Hersh, “Those guys sound really good playing Mozart.”

If I had to describe Esperanza Spalding’s performance in one sentence, it would have to be,  A moment in time. A moment in time where it would serve you to simply allow yourself to be completely present.  Because with Spalding, you have to accept that you’ll never hear it played ever again the way you heard on this day. As she spoke about the originality of what we were hearing, I began to understand why the program didn’t have much to say about the performance. And you know what, I’m sort of glad they didn’t spoil the surprise. It was like we had a front row seat at an Esperanza Spalding private jam session. It sounded like freedom, and her freedom made the listeners feel free. Free of structure and censorship even.

The song that stood out to me the most was “Ebony and Ivy;” a story that is centered around the effect that the Ivy League education experience can have on people of color, and the bondage it can create with some its chains made up of well-dressed ignorance. In a subtle but potent way, she spoke of one unacknowledged truth after the other. She invited us out of our seats to dance and move, which was another first for me at the BSO. Gently pulling at our comfort zones, she challenged structure and encouraged originality from the audience and later Conductor Hersh after an encore. Hersh melted under the pressure of Esperanza’s request that he accompany her in a freestyle creation. However, while Hersh didn’t quite have the verbiage for the freestyle game, he grabbed his base and graced us with impromptu notes that left us all cheering for them both.