Theatre Review: ‘Heathers: The Musical’ by How Do You Like Me Now Productions at Chesapeake Arts Center 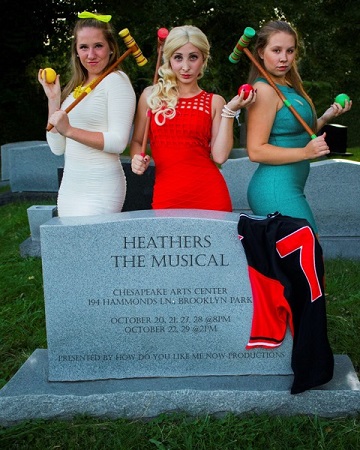 A relative newcomer to the Baltimore area theatre scene, How Do You Like Me Now Productions (HDYLMN) is committed to “starting the conversation.”  They mean to do nothing less than end bullying, intimidation and hate crimes through theatre.  Their current production is “Heathers: The Musical.”  It may not stop any of those things, but it certainly shines a spotlight on them.

With a book, music and lyrics by Laurence O’Keefe and Kevin Murphy, “Heathers, The Musical” is based on the 1989 film of the same name by Daniel Waters. This production is directed by Ed Higgins with technical design by Josh Anderson. The show has some deficiencies but also has some terrific elements.

“Heathers: The Musical“ is about Veronica, a brainy high school kid with a nerdy, overweight best friend, Martha.  Both are relentlessly bullied by the cool kids, particularly by an odious bunch of three mean girls collectively known as The Heathers. The leader of the Heathers, Heather Duke, is the worst of the lot.  Oddly, she brings sweet Veronica in as a kind of protégé.  Into this toxic stew arrives a new, very cute guy named JD.  JD and Veronica become a thing, semi-accidently kill Heather Duke, then cover it up.  That starts them down a dangerous path to two more murders, and an attempt by JD to wipe out the entire school. How Veronica saves the school and redeems herself (kinda) nicely wraps up the story.  Oh, that’s all set to some catchy, 80s-vibed tunes, by the way.  It’s a musical, after all.

The show runs long, with some scene changes taking way longer than they should have given the tasks at hand, making the overall pace seem slow. On opening night, musical director Andrew Zile and his rockin’ pit band were decked in 80s glam-band drag, and overall did a fine job.  They were tight, on key and played well. But on virtually every musical number all you could hear was the band, instead of a balance between the orchestra and vocals. Also, there are specific pools of light on stage and the actors need to be in them – not off to one side or the other. The performers missed their mark in the light on more than one occasion during the performance. Luckily it is an easy fix. I’m sure they’ll be more aware for next time.

‘Heathers’ is an excellent choice to highlight a variety of social ills through entertaining musical theatre.

Kristen Rigsby did some clever choreography given the limited space and the size of the cast.  It is not easy to make full production numbers interesting under those circumstances and Kristen is quite good at it.  The steps were well handled by the entire cast and Rigsby has an excellent command of girl-group moves on numbers like “Candy Store.”  Grant Myers also made a fine show of the costumes, with period appropriate garb on the entire cast.

The chorus might have benefited from a little more rehearsal on some of the group vocal numbers (when they could be heard) but was overall quite good. Their enthusiasm went a long way toward contributing to some fun-to-watch numbers.  I especially enjoyed “My Dead Gay Son” and “Big Fun.”

The show has several outstanding supporting casts members, including director Ed Higgins and Jim Gross, hilarious in their rendition of “My Dead Gay Son.” Jennifer Alexander is a bright spot playing hippie school teacher Ms. Fleming and has a fine voice to boot. Zach Husak and Michael Leard are classics as the proverbial dumb jocks.  And Ellie Parks and Emily Wesselhoff are terrific as the supporting Heathers.  I particularly enjoyed Ms. Parks singing “Life Boat.”

Kristen Demers has just the right look and sound as the hapless Martha.  With a rubber face and great comedic timing, she is a pathetic delight who can break your heart.  She epitomizes those kids in high school who just can’t catch a break and are judged by their looks, not their characters.

Bryce Gudelsky as the meanest of them all, Heather Chandler, is outstanding in her characterization of the kids who rule the school, and when she gets killed off, her ghost is even better. Wide-eyed with a big, belting voice, she’d be great as Evita in a couple of years.  For now, she’s in fine form as the girl you love to hate.

Luis Montes as JD Dean has the best voice in the production.  And he is as cool as they come in the first scenes, spouting Baudelaire, coming to Veronica’s rescue, telling off the bad jocks and mean girls while hiding some serious sociopathic issues.  Easy on the eyes and scary, especially when he sings “Brain Freeze,” and with Veronica on “Dead Girl Walking.”  A dangerous combination that Montes uses to great effect.  He displays a range of emotions expected in older, more seasoned actors and does it without breaking a sweat.

Olivia Winter as Veronica Sawyers is wholesome, winsome, and can go from a level of calm acceptance to outright hysteria without ever making it look forced.  With a lovely voice she uses to convey her teenage angst in the songs “Seventeen” and especially “Dead Girl Walking,” she makes the character’s improbable actions totally believable, no mean feat when you’re dealing with weighty topics like murdering your classmates.

HDYLMN has an ambitious social agenda that should be applauded and supported. “Heathers” is an excellent choice to highlight a variety of social ills through entertaining musical theatre.   I know that local theatres are constantly struggling with budgeting constraints, finding and retaining good talent and the myriad of other issues that go along with running a theatre company.  I hope they can find firm footing. An eye to upping their production qualities on the technical side will go a long way toward helping them to achieve their worthy goals.  This show is maybe not their best but that only means the best is yet to come, right?  And we should all cheer them on every step of the way.