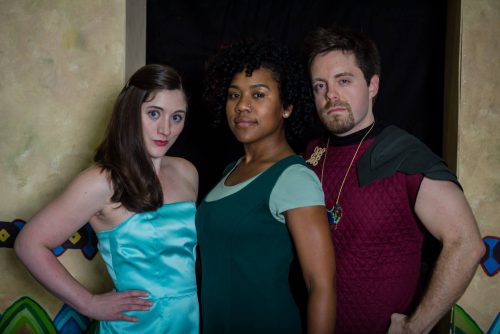 The curtain ascended Oct 20th on Reston Community Players’ colorful production of “Aida.” The auditorium was packed for the opening night gala of Reston’s 51st season of community theatre.

“Aida” was a Broadway hit in 2000 winning four of it’s five Tony nominations that year including Best Original Score which was penned by the legendary Sir Elton John. The love story isn’t altogether new since it was based on the 1871 Verdi opera of the same name which recently opened this year’s season for Washington National Opera.

Reston’s production of ‘Aida’ captures the depth of this timeless love story with passionate dance numbers and heart wrenching harmonies that leave you waiting for the next romantic duet.

Elton John’s opening song, “Every Story is a Love Story” connects the hearts of each audience member with its stirring words “Every story whether true or fabricated…bright or melancholy…new or ancient, all are tales of love at heart.” In the tale of “Aida,” we see a grand love story that depicts an obsession for wealth, power, and greed. There’s desire for companionship, whether planned or unexpected and a much larger theme of hope for freedom. As Aida becomes a captured Nubian slave she longs to free herself and her fellow prisoners but most of all each character is in a fight for the freedom to love.

The leading ladies Claire O’Brien Jeffrey (Amneris) and Tara Lynn Yates-Reeves (Aida) dominated the musical numbers every time they took the stage. Their voices and demeanor made you fall in love with each of them, making it difficult to choose sides. Yates-Reeves shared with us how “demanding” and heavy the role of Aida is to play but how honored she was to be given the opportunity.

Besides the vocal talents of the rival monarchies on stage, this production of “Aida” is set apart from other community productions by the beautiful set conceptions. Designers Andrew JM Regiec and Dan Widerski used the stage space to its highest capabilities. Each new scene was a gorgeous tapestry of color, fabric, and lights leaving you to wonder “what more could they have waiting for us in the wings?”  Regiec and Widerski’s use of the theatre’s fly system allowed the audience to be transported to elaborate locations such as a three mast ships deck,  the banks of the Nile, and the rugged dank camp of the enslaved Nubians.  The sets, in combination with the colorful costumes of designer Charlotte Marson, draped the actors perfectly in every scene.

Reston’s production of “Aida” captures the depth of this timeless love story with passionate dance numbers and heart wrenching harmonies that leave you waiting for the next romantic duet.  The passion that develops between Radames (Brett Harwood) and Aida is memorable long after the final bows.