‘A Quick 5’ with Celeste Jones 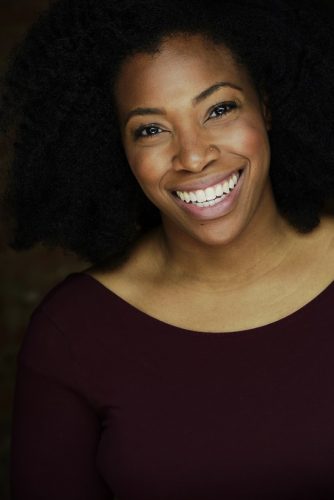 Celeste Jones is currently playing the role of Billie Holiday in Rep Stage’s production of “Lady Day at Emerson’s Bar and Grill.”  There’s not much time left to see it as it only runs through November 19th.  I wouldn’t be surprised, however, if she reprises her role at a later date.

Besides Rep Stage, Celeste has appeared as Nessa in “District Merchants” (Folger Theatre); Dove and Others in “Conference of the Birds” (Folger Theatre); Daisy/Nunkie in “Gleam” (Centerstage); Nia in “In the Red and Brown Water” (Pillsbury/Guthrie Theatre); Estrella in “Life’s a Dream” (Ten Thousand Things Theatre); Sophie in “Ruined” (Mixed Blood Theatre), and as TiMoune in “Once on this Island” (Ten Thousand Things Theatre).

For more information about “Lady Day at Emerson’s Bar and Grill,” click here.

What is it like getting to play the role of the legendary Billie Holiday?

It was actually quite daunting. When I got the call that they wanted me to do the show, I had a moment of like wow, ok, the pressure is on. But once rehearsals started and we really started getting into it, it became kind of like an honor to tell this story and to embody this woman who really did struggle through so much. So exciting and daunting and everything in between, a bit of an emotional rollercoaster.

What is the name of your favorite song in the show that you get to perform and why?

I have two. I would say I really like how we tackle “Strange Fruit” with the minimal accompaniment.  That song is so powerful and relevant even today. It’s kind of hard not to love it. But I also remember reading somewhere (and I’m not sure if it’s true) that she didn’t always love performing that song because it was misinterpreted as a nice jazzy number and people didn’t always hear what the song actually had to say, so I found that really fascinating. But I also love the opening song of the play “I Wonder Where our Love has Gone”… I’m not sure I have a reason for that one, it just kind of resonates with me. 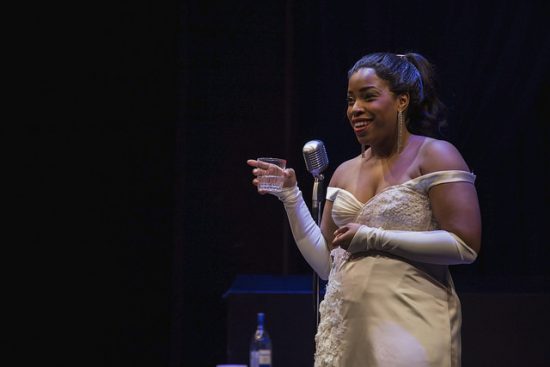 Please talk about what you did to prepare for the role of Billie Holiday.

Well, the tricky thing about it was I’m not Billie Holiday, obviously right? But people will come into the show expecting Billie Holiday regardless. They’ve listened to the music, etc. I knew that I couldn’t not copy her exactly, particularly vocally because one, she was smoker, and I’m not, and that gives you a gravelly-ness to your voice that’s hard to imitate. But I spent a lot of time listening to her songs, particularly the ones from the show, to try and get the cadence and how she said different words down. I also listened to a few interviews that she gave to kind of gauge her pattern of speech. It was hard because, while here music is easy to fine, live performances and interviews are few and far between so it was kind of a mash up of trying to put all of those things together and then mix it up with myself to create my Billie.

What can audiences learn from watching “Lady Day at Emerson’s Bar and Grill?”

First, I think they can gain a greater understanding for Billie Holiday as woman, as a black woman, a pioneer. Lots of people enjoy her music, but not everyone knows her story and it’s kind of a tragic one. There’s also a little bit of a history lesson that could be liken to some of the prejudices and injustices we still see today. But mostly I really just want people to kind of love this woman, she’s funny and smart and heart breaking.

Please talk about anyone who has been a mentor to you.  How did they influence your acting career?

Well, I’ve had a quite a few mentors from college until now. It’s funny, I started doing theatre long ago when I was kid but I never got any parts. I guess teachers didn’t think I was that good? I dunno. But in college I had two professors who not only believed in my talent but really pushed me to go further, which gave me confidence to take the next step, which led me to Minneapolis, where there were SOOOO many great seasoned actors that took me under the many wings and kind of showed me the professional ropes and encouraged me. Then, of course, my parents who are my number one fans. It kind of takes a village in acting because you’re not always working, and that can be hard, but I’ve been very fortunate to really be surrounded by multitudes of people that have supported and guided me.