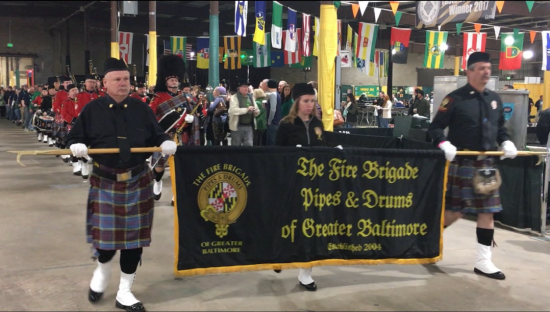 The 44th Annual Maryland Irish Festival kicked off this past weekend at the Maryland State Fairgrounds and the Maryland Theatre Guide was there to witness the fun!

The festival runs over three days and it’s the largest Irish themed festival in the country. From Irish step dancing, historical speakers and various vendors selling Irish clothing, jewelry and so much more, to authentic and delicious Irish cuisine, (well a girl has to eat to write a nonbiased review), and we can’t forget the specialty drinks and cocktails.

This volunteer-run event hosts some of the biggest and most popular bands in the tri-state area. I only wish I could have camped out for all three days and have watched them all. There are three stages at the festival, including the Guinness Stage and the Guinness Blonde stage in the North Hall, along with the Tullamore Stage in South Hall.

…This festival is run like a military maneuver …… very impressive!….

Kicking off the entertainment on Friday night on the Guinness Blonde stage was “Bogside Rogues” out of Philadelphia, PA; a four-piece band comprising Bob Hurst (Vocals, Accordion, Tin Whistle), Tim Murphy (Acoustic Guitar, vocals), Fran O’Connor (Bass Guitar, vocals), and Bob Finegan ( Drums, Percussion). These guys got the party started playing well-known songs, all while getting the crowd warmed up for the opening ceremony, complete with pipes and drums, a touching tribute to veterans past and present.

Next, it was the “Kilmaine Saints” who took to the Guinness Stage and were instantly a hit with the crowd who were up on their feet and dancing to this fun band out of Harrisburg, PA. Brendan Power (Lead singer) is not only a great singer but an outstanding frontman. Liz Mallin (Fiddle), Billy Brown (bagpipes, guitar, mandolin & tin whistle), Mike McNaughten (drums), Rich Lipski (Guitar), and Jon Heller (Bagpipes, Bass guitar) complete the band. This high-energy band is a must see.

Heading to South Hall and the Tullamore Dew stage I caught a glimpse of the “19th Street Band.” This husband and wife team exuberate energy, performing a mix of Irish classics along with their own songs. Caolaide David, Meghan Davis, Brian White, and Patty Dougherty complete the band. Caolaidhe came from Holywood, Northern Ireland to the U.S. eleven years ago to pursue a music career. He met Meghan in 2007. They instantly had an infectious musical connection and are now partners in life and music. The passion they have for each other and their music shows in abundance.

This festival is run like a military maneuver with several of the bands rotating stages, setting up and packing down in a 15-minute window; very impressive!

Back at the Guinness Blonde stage, it was the “Barley Juice” band, consisting of Alice Marie, Kyf Brewer, Eric Worthington, and John Tracey. I will confess I did think that it was Keith Richards on stage in a kilt! Close enough, it was Keith “ Swanny” Swanson leading this great band. Allegedly raised by squirrels he founded “Barley Juice” with Brewer back in 1998. They are not only a delight to hear with popular Irish songs intermingled with drinking humor, and the crowd loved every minute of it.

Portz pub hosted “Capital Celtic” on Friday night playing all the sing-along favorites to a packed house. Portz pub holds a special history at the festival as all proceeds from the pub are given each year to a family who has lost a first responder in the line of duty. This year fire-fighter Eric Dorian Schaefer was honored and proceeds given to his family.

On Sunday I headed back to the festival and caught the “Shamrogues” band: Jim Phelan (Banjo), Adam Wyatt (Lead Vocals, Bodhran), Sarah Stepanik (Fiddle), Christopher Marsheck (Guitar, Vocals), Gary Peresta (Bass), Evan Phillips (Drums), and Katie Fox & Katie Whitman (Irish Dancing). This group has so much energy and is always a joy to hear and see! I tried to pick up a few dance moves, but I am just not that skilled.

There are lots of charitable organizations that benefit each year from contributions from Maryland Irish Festival. You can get more information about the Irish festival here.