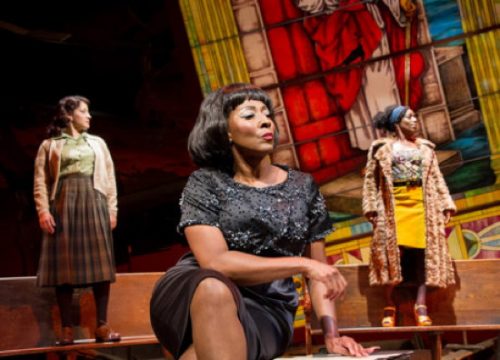 In Nina Simone’s “Sinnerman” a man runs all over creation looking for a place to hide, while Simone asks him repeatedly, “Oh Sinnerman, where you gonna run to?” It’s not unlike the mother in Dudley Randell’s “Ballad for Birmingham” racing all across Birmingham to find her child. The power and energy that went into those two works epitomize the chaotic landscape of the 1960s, especially of September 15, 1963, when four little girls were blown to pieces by the Ku Klux Klan. It is a landscape that is directly reflected in Nina Simone’s interior life and in Christina Ham’s “Nine Simone: Four Women,” this life takes full form.

This play is what theatre is meant to be, engaging and truthful…

The story deals with the four women in Nina Simone’s song “Four Women” as they explore what it means for each of them as an individual to be an African-American woman in the 1960s. Specifically what it means to be an African-American woman right after the 16th Street Bombing in Birmingham. The characters come together in the ruins of the church, and through Ms. Simone’s music they tease out their relationships to their skin color and to each other. Award-winning director Timothy Douglas provides an experience that is nothing short of breathtaking.

In one of the most breathtaking performances this reviewer has ever seen, Harriet D. Foy plays the inimitable Nina Simone. Foy plays her with every nuance of strength and vulnerability as the actual woman. Every single song that she sings is a showstopper, but especially the harrowing “show tune” “Mississippi Goddam.”

In a stellar debut to the Arena Stage, Theresa Cunningham plays the formidable Aunt Sarah.  She provides a good amount of the comic relief in the play, mostly at the expense of the two younger characters, but also in response to Nina Simone’s presumed affluence. As Sarah, Cunningham excels, especially in the peaceful hymn, “His Eye is on the Sparrow.”

The foulmouthed Sweet Thing is played by five-time Helen Hayes nominee Felicia Curry, who previously worked with Douglas on Ayad Akhtar “Disgraced.” Curry pulls double duty as the show’s dance captain as well. Her part in the song “Brown Baby” was especially beautiful.

Fresh from Broadway’s “Airline Highway” and making her Arena Stage debut, Toni L. Martin lights up the stage as the hopeful Sephronia, who marches with Dr. Martin Luther King. Martin beautifully portrays the complexity of a woman between two races.

Darius Smith also makes his Arena debut as Sam, the pianist. He captures the energy and focus of Simone’s playing perfectly.

The set is nothing short of a feat of theatrical genius. Designed by Timothy Mackabee, whose work was recently seen on Broadway’s “The Elephant Man” starring Bradley Cooper and Spike Lee’s “Mike Tyson: Undisputed Truth.”  Church pews precipitate from the roof, suspended by wires (piano wires?), and bricks and rafter poke out of the ground.

The period costumes were designed by Kara Harmon, whose work has been seen from everything to Broadway’s “The Crucible” to Season 2 of Netflix’s “Daredevil” series. An especially notable detail is the incorporation of the brick from the destroyed church that infiltrates Sam’s tuxedo.

Nina Simone’s voice is one that sticks in your head from the moment you first hear it because it’s like no other voice in the world. It’s so raw and so strong that it seems to go right through you.  And she wrote music that was not easy or comfortable to listen to because that was truly what was inside of her.  This play is what theatre is meant to be, engaging and truthful and just like Ms. Simone’s voice goes right through you, so does this play, changing you for good.

Running Time: One hour and forty-five minutes with no intermission.