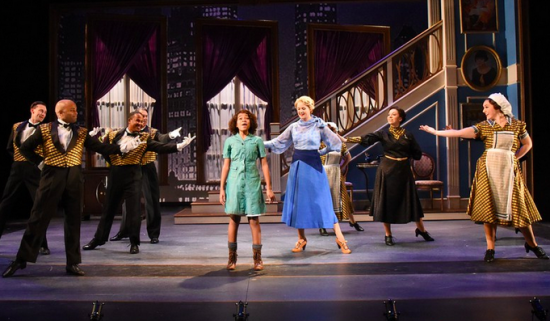 “Annie” hit the stage at the Olney Theatre Center on Thursday for opening night. Get ready, this show will steal your heart. With its memorable songs and durable storyline casting, the title role is crucial to the success of this well-known and beloved musical. There is no flaming red hair, but the iconic outfits and the talent are in abundance with Noelle Robinson who plays the title role in her debut at Olney Theatre Center.

Robinson sings and dances her way through “Maybe,” “It’s a hard Knock Life,” “Tomorrow,” and many others with the professionalism of a much older seasoned performer. Kudos to this young girl for singing, dancing and handling her furry partner “Sandy” with great skill.

Musically directed by Jay Crowder, choreography by Rachel Leigh Dolan, and directed by Jason King Jones, this show will take you on a rollercoaster of emotions, have you tapping your feet, and humming tunes.

In case you are not familiar with this iconic film and musical, the show’s energy is centered around an orphanage run by the mean and ruthless Miss Hannigan. All this takes place during the great depression back in the early 30s. The show focuses on the cold but extremely humorous relationships between the orphans and Miss Hannigan and Annie’s growing and warm relationship with Oliver Warbucks, the billionaire who takes her into his mansion for the Christmas holiday season.

Rachel Zampelli plays Miss Hannigan and she is a sadistic joy to watch. She vamps her way through this part loathing the orphans in her care. Her flirtatious antics with every man who crosses her path are hilarious. Her demise comes when she tries to be part of a financial scam to exploit Daddy Warbucks. Zampelli is fantastic in this role. She belts out “Little Girls” stealing the limelight from the orphans, and deservedly so.

As Oliver Warbucks, Kevin McAllister is well cast as the rich tycoon who seems to have fared well through the great depression. His vocal experience is abundant in this role. His velvet-like strong tones are a pleasure to listen to with songs like “Something was Missing” and “I don’t need anything but you.” Yet he fails at times with his line delivery. He is handed so many great one-liners with this script but his timing seems stiff and awkward at times losing the sarcasm and humor that is intended for this role. McAllister’s character, however, does develop gradually from the hard businessman to the doting adoptive father.

Patricia Hurley plays Grace Farrell. Hurley is perfect is this role. Farrell is Warbucks’ secretary. Hurley brings class, empathy, and dare I say it grace to the role with her outstanding vocal ability and pose. Having seen Hurley in other roles, she is deliberate in her delivery and a joy to listen to as she joins Annie and the ensemble in “I think I am gonna like it here” and “New Deal for Christmas.” Hurley’s voice really stands out with her extension range. She is a well-rounded performer but often a little awkward in her dance moves. By the end of the show, you get the impression that Oliver Warbucks eventually might be inclined to take a romantic interest in his taken-for-granted secretary.

Wilson Jermaine Heredia plays Rooster Hannigan, brother to Miss Hannigan. Rooster, along with his girlfriend Lily, played by Dani Stoller, think they have found a way to hit “Easy Street” by trying to claim orphan Annie as their own. Heredia, Stoller, and Zampelli give the audience a great rendition of “Easy Street,” performing it with humor and tight harmonies. Heredia, seemed to have lost his way with his lines at times and spoke incredibly fast so it was sometimes difficult to comprehend what he was saying. I am sure this will be tweaked as the run goes on. Stoller is the perfect sidekick to Heredia searching for her place on easy street.

The female ensemble is fantastic and take on multiple roles.

Standouts for me are Emily Madden, Julia Lancione, and Ashleigh King who flip-flop from radio starlets to house staff at the Warbuck’s home to staff at the White House. These ladies are vocally blessed, singing in perfect harmony.

Karl Kippola takes on several roles and brings humor to them causing quite the stir with his transformation from a stiff upper lipped politician to belting out ” Tomorrow” on one knee. (Kippola is also the understudy for Oliver Warbucks.) Rob Quay plays former President Franklin D. Roosevelt with great conviction and character.

In case you’re wondering about Annie’s faithful companion, her dog Sandy is played by Petey who is an ambassador for rescue dogs everywhere and especially pitbull breeds.

Designed by Danile Ettinger, the sets,  from the sparseness of the orphanage to the opulence of the Warbucks mansion, the white house and the homeless camp are perfectly recreated. There is even a little falling snow to get you in the festive mood.

Running Time: 2 hours and 30 minutes with one 15 minutes intermission.

“Annie” runs through at Olney Center theatre for ticket information you can check out the website here.