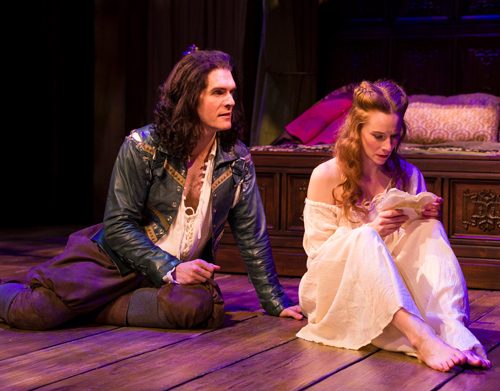 “Shakespeare in Love” is based on the brilliant Academy-award winning 1998 movie written by Marc Norman and Tom Stoppard. Baltimore Center Stage is currently presenting a stage version of that film with a script adapted by Lee Hall. Masterfully directed by Blake Robison (artistic director of the Cincinnati Playhouse where he mounted the play before he brought it to Baltimore), it is a fictional and inspired imagining of William Shakespeare stuck with writer’s block. It is a joy to watch how, by having his own star-crossed love affair, the young Will writes one of the most famous love stories ever written.

Sexy, fun and literate, this production is a thinking man’s – and woman’s – romantic comedy.

It is hard not to compare the play to the film crammed with a brilliant British, Australian and American cast. With the exception of Shakespeare, all of the actors play multiple roles. Overall, they do an incredible job in this joyous love letter to the Bard, theater and theater people.

Will Shakespeare (Nicholas Carriere, a tall, handsome puppy dog of an actor with a flair for fast-paced physical comedy) begins to literally find his words with the help of rival and friend, fellow playwright Christopher ‘Kit’ Marlowe (a solid performance by Avery Glymph who could have been a bit more dynamic). This is a wink to the long-held theory by some scholars that he helped Shakespeare write some of his plays. (In 2016, Oxford University Press even credited Marlowe as co-author of three “Henry VI” plays.)

A muse appears in the form of Viola (the radiant and effusive Emily Trask), a noble lady with a passion for theater. Shakespeare becomes besotted with her. The result is a famous sonnet and two plays. His growing love affair and the characters around him comically and sweetly mirror what will become “Romeo and Juliet” (thankfully not, as it starts out, “Romeo and Ethel, The Pirate’s Daughter”). Viola will ultimately become the heroine of his next play.

Viola loves the theater and desperately wants to be an actor. As a woman, this is strictly outlawed in England. She is soon to be married off to a prig of a suitor, Wessex (a marvelous Michael Brusasco), in need of a healthy dowry to support his tobacco farm in a little colony called Virginia. In her last gesture of freedom before her marriage and voyage to the New World, Viola disguises herself as a young man named Thomas Kent. She auditions and wins the role of Romeo. This plot device of gender-bending and hidden identity is a trademark of many of Shakespeare’s plays and works with great hilarity here.

Will is surrounded by many colorful characters, some based on historical figures. They include theater owners, investors, and actors who, despite Wessex’s efforts and their own rivalries, come together to get “Romeo and Juliet” to the stage. David Whalen has tons of charisma as the theater “star” of his day, Ned Alleyn. John Plumpis as Fennyman the investor comes to life when offered the role of the apothecary. Barzin Akhavan is hysterical as Henslowe and provides the comic insights about how theater works. Laura Gordon is perfect as Viola’s nurse.

Richard Burbage (the wonderful Brent Harris, last seen in Center Stage’s Les Liaisons Dangereuses) was actually a friend of Will’s and played many Shakespearean roles. Though considered the first great actor of the British stage, this play imagines him as pompous and a ham. He, however, saves the day when he offers up his own theater, The Rose, to present the play after Wessex closes down Henslowe’s Curtain. After all, the show must go on!

The creative team has produced a visual delight. The set designed by Tim Mackabee is a clever Chinese puzzle box of a structure replicating an Elizabethan theater. It is a brilliant use of many moving pieces using the depth of the stage, sliding barn doors and a trap door. The costumes by Kathleen Geldard are scrumptious, especially those worn by Viola and Queen Elizabeth (Naomi Jacobsen who holds her own as the queen).

Hats off to the Sordelets, the father and son fight directors, who created not one but two fight scenes which are beautifully choreographed chaos, full of comedy and swash.

It only makes sense that a movie about the theater should be presented as a play in a theater and this production does not disappoint. Sexy, fun and literate, this production is a thinking man’s – and woman’s – romantic comedy.

Advisory: Contains some mature themes and sexual situations more suitable for audiences from middle school up.

Running Time: Approximately 2 hours and 25 minutes with a 15-minute intermission.