Theatre Review: ‘The Lathe of Heaven’ at Spooky Action Theater 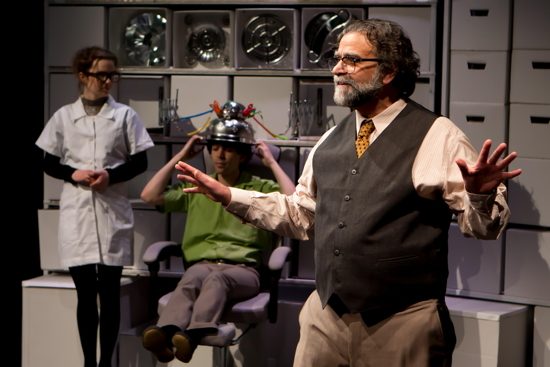 One of the most influential and inspiring artists of our time, the late Ursula K. LeGuin was a pioneer in the genre of science fiction and a literary behemoth. Nestled amongst her collection of ambitious trilogies and epics is a tiny heartfelt 184-page novel called “The Lathe of Heaven.” The 1971 novel was adapted into a 1980 TV movie starring “The Color Purple’s” Margaret Avery and then into a 2002 remake of that film. Now, Georgetown professor Natsu Onoda Power brings this delightfully idiosyncratic story to the Spooky Action stage, and it is their entry in the Women’s Voices Theater Festival.

What a fun and fantastic journey…

When we open the play, George Orr, a draftsman, is overdosing in attempt to stop himself from having “effective” dreams, which change reality. After having one of these dreams, the new reality is the only reality for everyone else, but George retains memories of the previous reality. Under threat of being placed in an asylum, Orr is forced to undergo “voluntary” psychiatric care for his drug abuse where he meets William Haber, an ambitious Oneirologist, who wants to use his machine, the Augmenter, to control George’s dreams and, thereby, reality.

In a collaboration between Georgetown University and Spooky Action Theatre, the show stars the brilliant actor/playwright Matthew Marcus as the adorable sleep deprived George Orr. Marcus is charming and exceptionally talented at physical comedy.

Guthrie Acting Company veteran Matthew Vaky stars alongside Marcus as the fiendish Doctor Haber. Together with his chorus of scientists, Vaky expertly navigates the character through his changing realities.

The dexterous Ensemble is an incredibly talented collection of Georgetown students which together with all of the juggled technical elements, puppets, projections, and paper dolls create a world that is unhinged but navigable. In a play like this where reality is coming apart at the seams, one would expect to be hopelessly lost, but they take you on that journey and see you through to the end.

The all white malleable set composed of storage boxes is designed by the playwright Natsu Onoda Power and serves as a canvas for the disjointed reality in which this play exists.

Projections designed by Danny Carr color the set and moves the play seamlessly between genres: Sci-fi, romance, dance, even trivia show (be sure to freshen up on your moon trivia before you go!).

The costumes that range from uniform overalls to the vibrant space age numbers are designed by Helen Hayes nominated theatrical artist Debra Kim Sivigny and add another layer of theatrical unreality.

LeGuin was a wordsmith like no other, and this play is like no other. I think she said it best herself: “it is good to have an end to journey toward, but it is the journey that matters in the end” What a fun and fantastic journey, Spooky Action!

“The Lathe of Heaven” adapted and directed by Natsu Onoda Power from the book by Ursula K. LeGuin is running from Feb 15 – Mar 11. For tickets or more information, please click here.