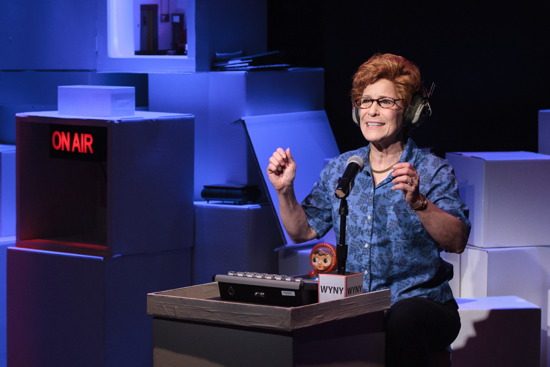 One Sunday night in 1983, New York City’s WYNY-FM made radio and television history by introducing the world to a little German-Israeli American woman. What she talked about that night was a subject that – up until that point- listeners had never expected to hear about on the radio: sexual intercourse. Now the incident is part of a beautiful one-woman show written by Mark St. Germain of “Freud’s Last Session,”  hailed by the New York Times as “a family saga, a Holocaust drama and an exploration of 20th-century Jewish identity.” It makes its DC Premiere at the prestigious Theater J.

She [Jacobsen] seamlessly switches between the differing time periods and the different voices of the character, creating a performance that is captivating from start to finish.

Dr. Ruth Westheimer is most widely known as a radio and television sex therapist.  Described as the “Sister Wendy of Sexuality,” she helped to revolutionize talk about sex and sexuality on radio and television, and she was noted for having, “an accent only a psychologist could love.” But through the play, we meet her as Karola Seigel, a young Jewish girl in Germany, forced to flee the Nazi Party. From there Dr. Ruth guides the audience through her incredible life from Kindertransport to the Haganah in Jerusalem, to becoming a single mother and coming to America, all the while filled with a humor and an infectious sincerity.

When Debra Jo Rupp, best known from her performance on “That 70’s Show” as Kitty Foreman originated the role of Dr. Ruth when it made its world premiere as part of the Penguin Rep Theatre’s 2015 season, she had this to say of the character, “when you get a role like this, even if it scares you, you take it.”

In her very first one-woman show, the incomparable Naomi Jacobsen stars as Dr. Ruth herself. Jacobsen perfectly embodies Dr. Ruth’s intelligent and heartfelt spirit. She seamlessly switches between the differing time periods and the different voices of the character, creating a performance that is captivating from start to finish. Jacobsen is one of DC’s favorite actors, a company member with Woolly Mammoth and an Affiliated Artist with Shakespeare Theatre Company, and her career with Theater J has spanned 16 years.

In a match made in DC Theater heaven, Jacobsen is directed by another of DC’s favorite theater artists, Holly Twyford. She is not only a Helen Hayes nominated director, but she is a talented actor, recently appearing as Desiree in Signature Theatre’s “A Little Night Music” and as Martha in Ford’s Theatre “Who’s Afraid of Virginia Woolf?”

The set is a departure from the script, which calls for a static living room set, in lieu of a visually captivating design. Theater J’s veteran, Scenic Designer Paige Hathaway piles white boxes on stage that Jacobsen then interacts with to build the world of  Dr. Ruth’s life.

“Becoming Dr. Ruth” is running at the Theater J from February 21- March 18th, 2018. For more information or to purchase tickets please click here.