With the sesquicentennial anniversary of the Civil War this year, Lazy Susan Dinner Theatre’s production of Big River, directed by Jeffrey Davis, couldn’t have come at a more appropriate time. Big River is based on Mark Twain’s popular 1884 novel, The Adventures of Huckleberry Finn. The musical version with book by William Hauptman followed along quite faithfully. I really enjoyed the score and lyrics by Roger Miller, as well – the bluegrass, gospel, and country styles were great for the story, and many times I found myself tapping along to the beat. 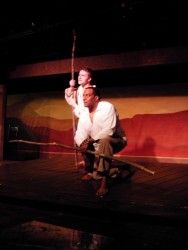 Stephen Hoch as Huck and Kevin Wiggins as Jim.

Walking into the Susan’s front foyer, I couldn’t help but smile at the wildly eclectic décor. A neon jukebox machine was sandwiched between a large brick fireplace and a carnival wagon, and Tiffany-esque mood lamps also added character. There didn’t seem to be a bad seat in the house/dining room, as there was expansive three-level seating, mostly in front of the stage. The stage stretched across the front of the dining room, and painted sliding panels of trees and forests slid back to reveal distant mountains, which offered a scene change option. A wooden raft, posed at a slight incline, was positioned center stage.

Cocktail hour consisted of sitting at the table for sixty minutes, listening to piped in jazzy standards and sipping wine from the limited but reasonably priced wine list – beer and mixed drinks were offered, as well. The weekend shows have a full hour of cocktails, while the weekday performances offer just thirty minutes. I’d suggest getting there a half hour to a few minutes before dinner is served as the best course of action—there was more than enough time to relax and enjoy the atmosphere during dinner. Lazy Susan’s groaning board buffet was tasty and offered a plethora of food, including roast chicken, ribs, roast beef, fish, vegetables, pasta, various salads, and incredibly delicious and fresh-from-the-oven baked breads and sweet rolls. There were multiple dessert options, but I thought the bread pudding stole the pre-show “show.” As is common for dinner theatre, my server was also part of the cast, and she was very sweet and accommodating. The servers/actors got in costume about ten minutes before curtain, and I was impressed with their quick turnaround and professionalism.

The performance opened with the rebellious Huck Finn narrating and Mark Twain making a brief appearance. The audience was quickly introduced to Huck’s home life, along with the moral and law abiding townspeople who query and sing, “Do You Want to Go to Heaven?” Amy Wolf’s portrayal of Huck’s dry, Bible-thumping guardian, Miss Watson, in particular, was very funny and got the most laughs out of the audience. I was also pleasantly surprised by how well the pre-recorded background music complimented the show, and the sound system was excellent. Kathleen McCormack’s choreography for the show was light and appropriate, and the actors had no trouble keeping up. The costumes were also fitting for the era, with Huck, Tom, and Jim’s being especially good. I was, however, a little disappointed with the lighting. It was unremarkable, and I feel like they could’ve used some more interesting effects to combat the mundane backdrop. It only really changed when Huck and Jim woke to the sun shining – it just got brighter.

Stephen Hock played the independent and thoughtful Huckleberry Finn, while Casey Fero was cast as Tom Sawyer, Huck’s adventure-seeking best friend. Both were musically accurate, and I think that Mr. Fero had the audience’s full and complete attention from the moment he sauntered into each scene. He had great stage presence and a twinkle in his eye when he performed the up beat “Hand for the Hog,” and the audience clearly enjoyed it. Kevin Wiggins was Jim, the escaped slave, and while Mr. Wiggins was slightly pitchy at times, he had a lovely baritone voice. His solo “Free at Last” was the most expressive and animated singing heard from him all night, and the audience reacted very positively. His quips and asides were funny, as well, and his depiction of the wise and compassionate surrogate father was sincere. I only wish Jim and Huck had had the same chemistry in this production as The Duke and The King, played by Lyle Blake Smythers and Giorgio Mazzarelli, respectively. They were silly and animated, and they and played off of each other very naturally and comfortably. Nevertheless, Huck and Jim’s duet “World’s Apart” was a touching number that showed them connecting more deeply.

As a heads up, if you bring the kids along, you may want to offer a brief historical context beforehand. Racial slurs abound in Mark Twain’s novel, and there are a few instances of period vernacular in the musical that may raise questions or alarm younger audiences.