Like Ira Levin’s other popular works, including Rosemary’s Baby, The Stepford Wives, and Deathtrap – the longest-running comedy-thriller on Broadway – Veronica’s Room is mysterious, dark, chilling, and suspenseful, and there’s lots of surprises in Rude Mechanicals’ masterful and haunting production. Without a director’s note, or a complete synopsis and scene breakdown, the main feature of the program is the sentence at the bottom: “FOR THE ENJOYMENT OF FUTURE AUDIENCES, WE ASK THAT YOU DO NOT REVEAL THE ENDING.” After watching the play, it becomes clear just why so many people have embraced this secrecy. I will follow the director’s request and I will not give all the plot twists and that surprise ending away in this review.. 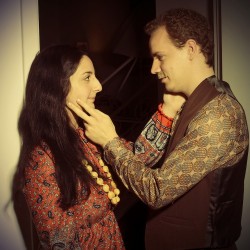 Leanne Dinverno as Girl and Thomas Leo McGrath as The Man. Photo courtesy of Rude Mechanicals.

Set in the Boston suburbs in 1973, Veronica’s Room starts with a Boston University student, listed in the program as “Girl” (Leanne Dinverno), and her date, a man named “Young Man” (J. Peter Langsdorf), who run into an elderly Irish Couple, “Man” (Thomas L. McGrath) and “Woman” (Katie Wanschura), at the restaurant they’ve gone to for their second date. Telling Girl that she looks remarkably like a girl who died from TB years ago in the family they work for, Veronica, the Irish Couple ask if Girl would be willing to come home with them quickly to pretend she is Veronica to help Veronica’s still living sister, Cissi, who is both suffering from dementia and cancer. They tell Girl that all they need her to do is to dress up like Veronica and tell Cissi that the reason she doesn’t get to see Veronica often is because the doctor doesn’t want her to get sick. Of course, with Levin’s other writing credits, the audience can expect that there’s something else happening under the surface of this apparently innocent charade. The trick is just figuring out what.

The show takes place in a small theatre with perhaps 40 seats and a stage that isn’t much more than a step up from the audience. Lacking a curtain, the set is plainly visible, furniture covered in sheets in a way that suggests the audience is looking into a room that has been closed up for years. With the appearance of the cast, even before a word is spoken, costume designer Katie Wanschura – also the actress playing Woman – has done a superb job setting the scene, no doubt having found actual vintage pieces to put Dinverno in bellbottoms and Langsdorf in a wide-collared, low-cut shirt that lets the audience know the exact time and place they have entered.

Unfortunately, the actors have some problems in the first scene: Dinverno’s lines are delivered too quickly and McGrath gets lost and tries to recover after delivering a few lines incorrectly. Still, there are some good laughs from the audience and the actors begin to settle down and become more comfortable, starting to be able to deliver their lines with conviction. Although Levin’s script is a times uninteresting and confusing, there are times when the dialogue is riveting, as in Wanschura’s closing lines. Diverno delivers a fine performance in the second act, especially in her scenes where the tension is at its highest.

It is clear why the twists and turns of Veronica’s Room are so closely guarded. It is the confusion and anxiety the actors portray that keeps the audience on the edge of their seats throughout the performance – that makes a trip to Veronica’s Room well worthwhile.

Veronica’s Room, produced by Rude Mechanicals, plays through July 2nd, moving venues after June 18th from 1700 Kalorama Road, NW, in Washington, DC, to the Bonifant Theater Space – 949 Bonifant Street, in Silver Spring, MD. Tickets are available for purchase online or at the door.