As I arrived at the Arts Barn Theatre to see the Damascus Theatre Company’s production of Little Shop of Horrors, I was charmed by the quaint brick building and felt a sense of simplicity as I walked through the lobby, which was decorated with handmade crafts.  Once I entered the actual theatre, however, the sense of tranquility began to fade as I saw the title of the show lit in red letters on the wall in front of me with the word “Horrors” appearing to be dripping with blood.  It appeared that this musical was not going to be your typical romantic comedy. 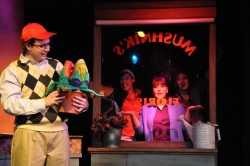 Howard Ashman and Alan Menken’s Little Shop of Horrors tells the story of Seymour (Gabriel Potter), an awkward young man who grew up in a flower shop (at the unlucky address of 1313 Skid Row) under the “care” of his crotchety boss Mr. Mushnik (David Fialkoff). When it seems as though the flower shop is about to go out of business, Seymour presents his latest botanical project: a toothy plant named “Audrey II”.  Audrey II gains Seymour attention from his boss, the media and his dream girl Audrey (Chrissy Barnett Miller).  Unfortunately, this plant cannot thrive on mere water and sunlight; it needs blood. As the plant grows larger, a few drops of blood from Seymour will not suffice, which leads Seymour to search for bigger meals for Audrey II.

Gabriel Potter plays an incredibly loveable Seymour, whose clumsiness and steadfast devotion to Audrey are endearing.  Potter seems unassuming at first, but as the show goes on, he demonstrates the strength of his voice, especially during “Feed Me! (Git It)”, his first major scene with the talking Audrey II.  Chrissy Barnett Miller (Audrey) shows excellent commitment to her character, even down to the way she scampers around the stage on the toes of her high-heeled shoes. Miller’s performance of “Somewhere That’s Green” is heartbreaking, as Audrey dreams of a future that most would find typical but to her seems perfect. David Fialkoff excels as the caring yet coarse Mr. Mushnik, and Bob Schwartz is able to quickly transition from his larger role as the dentist with a “certain fascination with human pain and suffering” to his smaller roles as Hollywood agents, magazine editors and world-renowned scientists.  Carrie McCabe (Crystal), Charlotte Hendrix (Ronnette), and Kylie Smith (Chiffon) help to further the plot with their tough and sassy one-liners and their lovely singing voices.  I only wish that the girls’ voices would have been louder over the large orchestra.

Director and Set Designer Rachelle A. Horn did an exceptional job at blocking the interactions between Seymour and Audrey, allowing their relationship to progress in such an innocent way that the two lovers only creep sideways toward each other when their facial expressions make it clear that they would rather be in each other’s arms.  Horn’s set of the 1960’s flower shop is fittingly nostalgic, but it still includes some eerie elements that mirror the dark plot, such as a spinning clock on the wall and spider webs clinging to the cash register.

Music Director Marci Shegogue leads a talented 8-piece orchestra in addition to working with the actors to create beautiful harmonies, especially apparent when McCabe, Hendrix and Smith sing “Prologue/Little Shop of Horrors” and “Da-Doo.” Megan May’s choreography is simple but delightful, and the characters are both clean and in sync during every dance. Costumers Flo Arnold, Susie Graham, and Lee Michele Rosenthal dress the actors in outfits that are both suitable to their characters and the era. Shy Seymour dons an argyle sweater vest and large glasses, whereas a more noticeable Audrey dresses in leopard prints (even down to her arm sling) and zebra stripes.  Audrey’s platinum wig is cut in a Carol Channing-esque style, very fitting of the 1960’s era.  While Ronnette, Chiffon, and Crystal look very pretty throughout the majority of the show, their initial costuming of Capri pants, letterman jackets and plaid skirts is off-putting as it seems too youthful and not age-appropriate for the actresses.  There may not have been many over the top special effects, but the eerie purple glow that Lighting Designer Rick Swink cast on the plant sent chills down my spine every time.

The most impressive aspect of the show is the props. Damascus Theatre Company’s Prop Mistress Maria Littlefield pays extensive attention to detail, even down to the changing of the dying flowers in earlier scenes to a bevy of vibrant living flowers in later scenes.  And the greatest prop of all?  Audrey II.  Run by Bill Brown and voiced by Carl Williams, Audrey II is a sight to behold and a delight to the ears. The flesh-eating plant is magnificent and gruesome from its slimy-looking green body to its hairy red tongue.  Even after seeing the show, I am still trying to figure out how any character fed to the plant was able to escape once the mouth was closed.

This is a show that is able to melt the audience’s hearts and chill their bones at the same time. If you have the opportunity to see the show, take it, but if you run into a plant between now and then, follow the characters’ advice and know that “whatever they offer you, DON’T FEED THE PLANTS!”

Little Shop of Horrors runs until June 26th at the Arts Barn Theatre at 311 Kent Square Road, Gaithersburg, MD.  For tickets, call (301) 258-6394 or order them online.  The running time of the show is approximately 1 hour and 45 minutes, plus a 15-minute intermission.