Once Upon a Mattress at Act Two @ Levine

Act Two @ Levine’s Once Upon a Mattress is a funny, colorful, well directed musical production. Kevin Kuchar directs a cast of 8 to 14 year-olds who dance, sing and act their hearts out. Once Upon a Mattress is a musical comedy with a score by Mary Rodgers, lyrics by Marshall Barer, and book by Dean Fuller, Jay Thompson and Marshall Barer. Written in 1959, the now-popular musical is based on the Hans Christian Andersen fairy tale, “The Princess and the Pea.” It’s the story of a fictional medieval kingdom ruled by a domineering and unpleasant Queen whose son, Prince Dauntless, is looking for a bride. 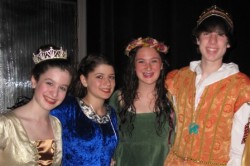 13 year-old Rachel Hahn, who is appearing in her 14th show with Act Two, provides the funniest and liveliest scenes as zany Princess Winnifred. Her rendition of “Shy” – where she suddenly appears after swimming the moat – is hysterical. Rachel proves she can sing professionally and dance with boundless energy while maintaining her comedic timing. Nicholas Krieger is charming as the sucker-sucking Prince Dauntless, and gets a lot of laughs when he stands up to his mother and when he sings “Man to Man Talk” – a duet with his father the King (Alex Millstone) – who has a very hard time teaching him about ‘the birds and the bees”. But the biggest crowd-pleaser was when Nicholas and Rachel sang “Song of Love” aided by a team of joy-filled courtly cheerleaders spelling out Winnifred’s nickname “Fred.”

Miranda Levin who plays Lady Larken has an amazing crystal clear voice. Her renditions of “In a Little While” and “Yesterday Loved You” both sung with Ethan Millstone, who played the not-so-faithful Sir Harry, were breathtaking. Funny 10 year-old Ari Goodfriend, who played the Court Jester, brought the audience to its feet with his toe-tapping rendition of “Very Soft Shoes” which showcased Ari’s ability to belt out and sell a song. The absolutely angelic voice of the Nightingale, played by Paige Beans, was yet another vocal highlight. Other fine performances were delivered by Gabriela Schulman (Queen Aggravain), Allaire Tetrault (Minstrel), and Alex Millstone (King Sextimus).

Director Kevin Kuchar and Vocal Coach David Kozisek have done an excellent job bringing out the acting and vocal talents of these youngsters. The orchestra, conducted by Brian Frye, played admirably and energetically while supporting the cast, all without overpowering them. Kevin Kuchar’s royal costume design was full of every color of the rainbow and were beautifully made. The use of movement and bells on the Jester’s hat made me laugh every time Ari came on stage.

The Figge Theater at the Georgetown Preparatory School has great acoustics, unobstructed sightlines and abundant parking. The theater can hold several hundred people. It’s too bad that the crowd that saw the production on Saturday afternoon was small. These amazing actors and singers deserved better.

Once Upon A Mattress ends its run on Sunday, June 5th at 2 PM at Georgetown Preparatory School’s Figge Theater, 10900 Rockville Pike in North Bethesda, Maryland. Tickets are $20 and can be purchased at the door. Directions are here.

The running time is 1 hour and 45 minutes plus a 15-minute intermission.