Fringe Review: Cry for the Gods: The Last Queen of Hawai’i

Warm caressing breezes blowing over blue-green waters, the sweet smell of flowers in the air and the sight of beauty everywhere – this is Hawai’i. Cry For the Gods shudders the history of exploitation and exchanges of culture that were not all fairy tale in nature. With hushed sighs, the vanquished Queen of Hawai’i, Lili’ uokalani, emerges onto the stage with a languishing hope of maintaining culture and customs at a time when British and American business interests were soberingly persistent. Set against a stark black velvet background of regal, polished wooden chairs, red patterned cushions and portraits of Hawai’ian royalty, J.L Stevens, U.S. Minister to Hawai’i, played with humor and self importance by returning actor Howard Wahlberg (he appeared in the January 2004 premiere at Sandy Spring Theatre Group in Rockville, MD) bullies his position which is to force American policies on the Hawai’ian people. 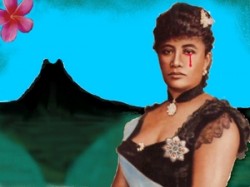 With visible emotion, Hawaiian actor, Leolani Hill’s beautiful portrayal of Queen Lili’uokalani, teaches us that acts of American betrayal, cultural annihilation and misappropriation of land and resources did not minimize the royal bearing of this icon of Hawaiian history. The cultural customs of Hawai’i and the Queen’s conversion to Christianity did not prevent Queen Lili’ uokalani from suffering the vicissitudes of American exploitation. Hawai’i’s sugar industry and constitution were put in jeopardy when the children of missionaries became the new “authority.” They eventually ousted the Hawai’ian royalty’s “right to rule.” Stevens, through stance and voice, was a constant reminder of the judgmental position Americans & Brits held of Hawaiians as mere “animals.”

I asked Howard Wahlberg what he had learned from his portrayal of J.L Stevens. He said his approach to the character came about as a result of his understanding control issues in his own personal life. “Embedded issues of controlling people put me in a dark place from which light emerged.” Wahlberg has made a decision to bring theater back into his life and has found that personal light liberating.

I loved the history, loved the cast, and loved the show. Especially compelling was the cast led audience singing of one of the many musical compositions written by Queen Lili’ uokalani, “Hawai’i Aloha”. The cast even shares a tasty Hawai’ian cookie treat with the audience at play’s end. Writer/Director Paul Handy can be proud of this production at The Mountain. Aloha! Job well done!

Cry for the Gods: The Last Queen of Hawai’i information and tickets.