Fringe Review: The Oregon Trail: Quest for the West!

When I was in my 8th grade Creative Writing class, all I ever wanted to do was finish my classwork quickly so that I would have time to play my favorite computer game Oregon Trail. Today, after 17 years, I was able to see this game come to life in The Oregon Trail: Quest for the West! In all honesty, this is one of the cleverest new musicals that I have seen in years! 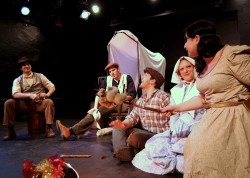 Directed by Ryan Emmons, Oregon Trail tells the story of an optimistic group of adventurers on their way from Missouri to Oregon in 1848, and the best part is that the audience helps to decide which way the story goes! The Narrator (Max Schneller) tells the story of Jebediah (John Bambery) who is a banker from New York (occupation selected by the audience) and is traveling to Oregon to start a new life with his religious sister Hope (Haley Greenstein). Before they begin their journey, the pair meets up with the mysterious Asdfjkl; (Brian Walters), handsome Jesse James II (named by Friday night’s audience and played by Jeff Smith), and spunky gunslinger Rebecca Black (also named by the audience and played by Julie Congress). Along the way, the six travelers meet up with many of the same troubles that plague the players of the original Oregon Trail game: crossing a river, dysentery and extra-long delays due to stubbed toes. Each of the actors is very strong and incredibly funny! Greenstein’s Hope and Schneller’s Narrator are especially entertaining with their expert comedic timing and hilarious facial expressions.

Keyboardist Enrico de Trizio caught the audience’s attention from the first time his fingers hit the keys with his vigorous musical performance. Maura Cordial’s lighting design fit every mood from the bright lights at joyous times to flashing lights during points of crisis. The 19th century Old West costumes designed by Julie Congress perfectly fit the setting, and Prop Designer Jen Neads outdid herself by accessorizing the stage with items originally found in the game (including two adorable fake oxen).

With the book written by Julie Congress, Ryan Emmons, Jen Neads and Zach Fithian, the music written by Rebecca Greenstein and Danny Tieger, and the incidental music created by Steve Goodwin, The Oregon Trail: Quest for the West is a must-see production at this year’s Fringe Festival. During the show, one of the characters asks, “What do you think this is? A game?” No, this is not a game…it is SO much better than that!

The Oregon Trail: Quest for the West! information and tickets.