Fringing a While With Cyle – Part One

Let us begin in the living room of my home. Four of the five roommates are slowly molding their spines to the various couches available. Two of them (Graham and Steve) on the sable futon –  which looks quite comfortable even though it’s held together with bungee cords. One (Grant) on the wooden futon that could potentially add some class to the room if it weren’t for me (Cyle) existing in the same house.

I’m sprawled out on a love seat that is so teal you can actually hear the color screaming at you from across the room. I now know what teal sounds like: a half crazed, mangy cat with only one eye 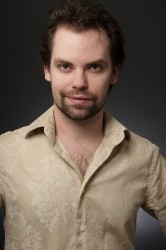 left yowling to be loved – and then sinking its claws into the back of your hand when you attempt any kind of affection. That is real, sadistic teal. The stuff you have is only a distant relative.

So the answer to that question in your mind is, “Yes!” You have stumbled across an actor’s den. Call it a group house, or a four-story, stand alone ghetto, but call it often with offers of work. We all call acting or directing our career on occasion, and during Fringe season we call ourselves crazy. Currently between four of us we are involved in ten shows. And while Fringe shows are quite interesting, the people comprising them have something to offer also.

One sits with the glazed eyes of someone who has been back to the buffet several times and, though he knows he shouldn’t, is determined to eat the entire restaurant. He dozes occasionally during the interview. It can be forgiven considering he just got home though he left the house 16 hours ago. That is our first actor type: Sacrifice sleep and sanity for art! Another sits up straight and calculates his answers to be as pleasing to as many as possible without being offensive to anyone. This is the second actor type: Every connection is important and any one of them might get you a job! Then we have the late comer who spouts off exactly what he’s thinking without care for who might disagree. This is the third kind of actor:” If you don’t like me someone else will; you’re not the only game in town!” I sit and record and do my best to drive the interview without inhibiting the creative spirit of the discussion. And here we have the fourth actor type: “Serendipity loves me and as long as I strive to be a great human other humans will support my quest.” I know…I want to smack me, too.

But we all have something in common. We all consistently involve ourselves in the Capital Fringe Festival. Fringe seems to have a gravity that only the strongest wills can escape.  But, so many don’t want to escape it. Like the lotus eaters of Greek mythology we constantly forget the horrors one experiences in the creation and production of a Fringe show. Now…most of these nightmares wouldn’t exist for a seasoned producer because those that make their living as producers dealt with these situations long ago and have learned to avoid them. For us newcomers, we tend to fall into every pit between the word go and the event horizon that is opening night

I won’t describe the craziness of my show, except to say that it involved replacing a director, two stage managers, six actors, redesigning all the blocking, and having to learn how to edit a mini documentary. Though I did have a rehearsal in which I received several lap dances. Win! Having said all that I will also say that we all persevered and created a wonderful show that has had some delightful things said about it online (I’ll plug my show and several others at the end of the column). Perhaps this is why we continue with Fringe: There is always an incredible sense of accomplishment when you do something yourself.

When asked what Fringe means to them my roommates responded with several statements that reflected their ideas concerning the festival, but also their ideas about art, in general, and behind it the business that helps to keep it going. Graham spoke of the experimental nature of the Fringe and how it allows freedoms not offered in other venues.  This sparked a random conversation that the other three roommates continued for a time before realizing that the “interview” was, in fact, still happening.  Steve thought for a moment about his answer, started a sentence, stopped. He started another sentence, stopped. He thought, opened his mouth, closed it. “I don’t know what the purpose of Fringe is.” A not uncommon response. Grant then jumped in with “Fringe is a breeding ground for new theaters and shows.”

I thought about all these answers and came up with one of my own.  At the end of the day the Capital Fringe Festival is an opportunity to express yourself through an artistic endeavor. The magic of the festival, though, lives in the fact that most of us end up distilling our emotional output into a show that says far more about us than we ever intended. There is something I discovered as I talked to artists candidly about their experiences. I kept seeing that the way they described their projects and their journeys through Fringe mirrored who I had discovered them to be internally. They did not project that “actor facade” that we all know and *cough* love. They created little worlds filled with heartache and trials and love and fear and, eventually triumph.

Fringe is the opportunity to put your life into a jar that is two months big. You get to to shake it and shape it and tap the glass to see what moves. You get to remind yourself that you have no one guiding you through this process. You have to fix all the mistakes that everyone in your cast and crew make. And then you have to be triumphant. You have to make something beautiful out of it all. And as you look back over the weeks you realize that you had so much help it astounds you. So many hands were given and taken that you feel like a pit boss in Vegas. Then you open the jar. Emerging from the glass is something that reflects and refracts your existence. It’s a moment of immortality. It’s a moment of meaning. It’s a moment of you. And that is the Fringe.

Warning! Now comes the plugging!  My little moment of “me” is called Love Me! (why everyone hates actors). It’s a show that follows the life of an actor as we discover why they are all so strange and crazed. There is sarcasm, lots of laughs and even a few strippers (boys and girls, because we’re not sexist). Opening night was amazing!  We also have Thursday July 14th at 6PM, Wednesday July 20th at 8PM, Saturday July 23rd at 3:45PM (strange) and Sunday July 24th at 1PM (join us after brunch). I will also be opening a show in which I will be singing and dancing as a well-informed slut.  Delightful…and talk about type casting.

This one is called Who’s Your Baghdaddy? (or how I started the Iraq war). Musical war comedy…can you beat it with a stick?  No.  Can you shoot at it with a sniper rifle?  No…because the theater has no windows! We will be performing at Woolly Mammoth from July 14th to August 7th Wednesday through Sunday!  Come be a part of it!

Who’s Your Baghdaddy (or how I started the Iraq war)
Directing as part of Capital Fringe.
Located at Woolly Mammoth Theatre Company-621 D St NW
July 14 – August 7-Wednesday through Sunday at 8 PM

Purchase tickets to both shows here.