Hairspray at The Little Theatre of Alexandria

Sue Pinkman directs the energy-packed musical Hairspray, set in Baltimore, MD in 1962, about defending our inherent rights to freedom and equality, no matter your creed, race, or gender. What makes this a genius plotline is the way that it delivers this important message…rolled in a big ball of fun! Audiences are used to being preached to when it comes to this kind of plea, and have accepted this heavy-handed communication method as normal. Who knew that the significance of human rights could be conveyed in such a silly, entertaining way? 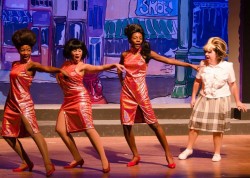 Shannon Kingett is refreshing as the upbeat Tracy Turnblad, a girl who, despite being picked on for her plus-sized figure, follows her dreams regardless. This particular dream involves auditioning for a local dance show hosted by Corny Collins, enthusiastically played by Gardner Reed. However, the real show-stealer is Christopher Harris, who is hilarious as Tracy’s mother, Edna Turnblad, in a role traditionally given to a man in this production. Gina C. Tomkus also shines in a number of smaller parts, such as Prudy Pingleton, a prison matron, and the high school gym teacher. Each role distinctly stands out, showing us all that there is truly no such thing as a ‘small’ part.

Once Tracy proves herself worthy of the stage, she begins to wonder why her African American peers cannot dance on the same stage with her. Proclaiming, “integration is the new frontier,” she decides to shake up the barriers and bring in her friends to dance with everyone, leading them all directly into a jail cell. Relentless, Tracy and her friends fight segregation until they achieve their goals. They do this through a series of uplifting music and dance numbers, with terrific choreography by Ivan Davila. Audience favorites included “I Can Hear the Bells,” “Welcome to the Sixties,” and “I Know Where I’ve Been,” sung by Brenda Parker, who depicted Motormouth Maybelle. Deafening applause followed every song, but Parker’s rendition inspired a standing ovation, which is usually saved for the curtain call.

The energetic spectacle, “You Can’t Stop The Beat,” proves to be one of the best closing numbers in musical theatre history. The audience clapped and sang along, and some, abandoning all decorum, got up and danced in their seats. This was followed by the loudest, longest, most animated standing ovation I have ever been a part of. This show was an absolute delight!

Hairspray plays through August 13th at The Little Theatre of Alexandria – 600 Wolfe Street, in Alexandria, VA. Purchase tickets by calling (703) 683-0496, or by ordering them online.

Running time is 120 minutes with a 15 minutes intermission.