The premise of Rock Bottom is straight forward. It chronicles the last of day of a rock band that’s seen better days. The band, Blood Orphans, is comprised of Shane (Andrew Lloyd Baughman-who also wrote the music and lyrics and co-wrote the book with Michael Shilling  who wrote the book Rock Bottom), Bobby (Tom Jackson), Darlo (Vaughn Irving), and Adam (Theodore Vossler). These four guys are in Amsterdam, fighting for a spot on the music label and their place on the rock band scene. Joey (Judith Baicich) is the band’s manager and the crush of Darlo. 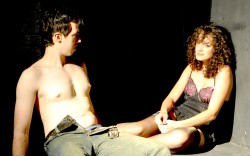 Let me get this out of the way – Although Landless’ website stated there was graphic language and nudity, I was not prepared for three sexually charged scenes, which I will not give away. Although I found these scenes to be quite ‘revealing’, they just didn’t contribute anything to the central plot of the musical. It was a little – excuse the pun – overexposed and was overkill.

Fortunately, we got some relief and some great singing – – my favorite being at the end of the production when Sarah (Fontaine) and Deena (Segai) sing “Sinners, Cannibals and Saints.” Their voices are fascinating, especially Fontaine’s. By the time this portion of the play arrived, I had tuned out, hoping for a quick ending. But Fontaine’s voice brought me right back into the mix. It’s unfortunate that she didn’t have more to sing in the show.

The cast delivered powerful and vocally stunning performances. Baughman’s Shane is an unsure teenager trapped in the body of a grown up lead singer in a rock band. I chuckled when he inquired about his Extreme Teen Bible. Irving’s Darlo is tormented by his father’s indiscretions, namely snuff films, and has difficulty separating himself from his family. Irving makes Darlo sensitive, but hides this sensitivity underneath scores of layers of personal demons that eat away at him nearly every waking moment of his life. Jackson’s Bobby has hands that talk to him (The tune “Mummy” is a combination of chords and singing that is supposed be Bobby’s hands). He’s a quick talker, always ready for a fight, and not one to take any nonsense from anyone, including his band mates. It would have been nice to hear Judith Baicich sing or attempt to play an instrument, although the program states that she doesn’t do either.

The intimate DCAC venue was perfect for this show. There are only four rows of seating in the quaint theatre. The set is full of musical instruments. A guitar, bass, keyboard and a drum set fill most of the stage area. A bar top and two bar stools are near the front of the stage and a microphone stand in the center of the corner stage. The brick wall is painted black. It’s used to detail each scene and time frame as the characters move from the night club and the apartment to the streets of Amsterdam.

If you love sex and rock and you use profanity a lot – this is your show! If you can’t take the nudity and graphic language – roll over to the cornfields of Oklahoma! at Arena Stage.

Rock Bottom: A Rock Opus plays through August 6th at the D.C. Arts Center (‘DCAC’) – 2438 18th Street, N.W, in Washington, DC. For more information and to purchase tickets go tickets, go here. Listen to some of the music from the show.