A Midsummer Night’s Dream at The Rude Mechanicals

Blending casinos and magic together, Sean Butler directs a Vegas inspired production of Shakespeare’s A Midsummer Night’s Dream. Slot machines, card tables, prostitutes, and Elvis are all part of the show, adding laughter and drunken belligerence to a typical Vegas night. The cast croons Frank Sinatra tunes, along with other classics, during set changes; in all, the show grabs all of the audience’s attention. The Set Design and Costume Design, by Linda Swann, are dazzling, pure Vegas over-the-top shine that includes sparkling white showgirl dresses, shredded at the bottom and big fluffy feather fans. 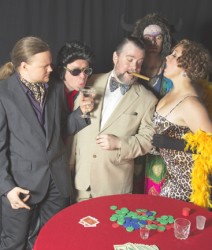 Tatania, played by Rebecca Proch, is a blonde Monroe look-a-like madam clad in a flashy red dress (picture Dorothy’s red shoes and imagine them in dress form) and the fairies are her working girls. Each of the fairy prostitutes has a provocative costume, one in a schoolgirl uniform, another dominatrix leatherwear, and the last, played by Brett Hurt, is clad in a French maid outfit. Brett Hurt plays Snug as well as the fairy Cobweb; as Snug she’s dressed in a leopard print dress, and sings a duet with her brother, Tom Snout played by Ray Shaw. They both show off their singing talent during a performance of Sinatra’s “I Get a Kick Out of You”. They hilariously bicker during the song, interrupting each other’s lyrics, such as when Snug is unimpressed with her brother and blurts out “You’re so dull!” while he’s crooning.

Nick Bottom ‘The Elvis Experience’ played by Donald Cook, sports the Elvis accent “Thank you, thank you very much,” sideburns, the classic upper lip pout, and a white flashy jumpsuit. After he is transformed into a donkey by Puck, played by Erica Smith, he performs “I Can’t Help Falling In Love With You” by Presley and attempts to romance the stage but fills the theater with roaring laughter instead; an Elvis impersonator turned into a donkey trying to seduce the audience by song is one of the funniest scene stealers of the show.

Along with the magical song performances, the fantastic costuming and set design, there is also Puck, running around and creating trouble in every scene she’s in, watching with delight at the chaos while eating out of a tub of popcorn. This production of A Midsummer Night’s Dream is one of the best I have ever seen, the Vegas theme is genius, hilarious, and is simply a ‘Must-See!’