Reggie Watts has confounded many critics by incorporating any number of entertainment styles into his act. He’s not strictly a comic because he sings with a fluidity and range that would be hard to match in any situation. He’s not strictly a stage performer because he’s being a DJ on stage during the act (creating beatbox vocal backups that he mixes into the track on the spot). He’s not strictly an actor because the whole night is imporvised. So I’ll go out on a limb and pigeon hole him as a polytalented improvisational performing artist (and Lord knows there’s thousands of those crowding our streets [pigeons, I mean, not polytalented…thing that I said earlier]). He is one of a kind. And the kind he is? Inspiring. 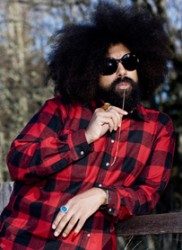 Throughout his act Reggie Watts discusses – in a very dry and sarcasm laden way – the many troubles facing our planet and our society today. Don’t get me wrong…the entire evening is hilarious, but if you want to, you can leave thinking quite deeply about many of the issues that humans choose to turn their backs on daily. There is never a finger pointed or a tongue lashed but the subjects are subtly and extremely humorously brought briefly into the light, examined, and cast aside for another gem of a moment to emerge.

The songs that he creates tend to be sultry and seductive and tend to jar you into laughing as you realize just what they are about.  Anything from sexualized propaganda to how fantastic is the city in which he’s performing. You laugh with him as he performs vocal acrobatics for the joy of the audience (and I suspect he obtains a bit of joy from it, as well)  – and are that much more entranced by the fact that what he just did is impossible for most humans. (I’m beginning to think there might be advanced alien technology under that giant afro).

He definitely gets three cheers from me because he’s just funny as hell. And you root for him the whole time because he is just so cool. And this coolness is not the hipster apathy (you will discover that I find  hipsters as nauseating as ipecac) that seems to rule this day, but a different iteration of cool. His is an older form of cool. His cool is what we elevated to the top of our societies many a century ago. He actually cares.  You root for him because he makes it obvious that he cares for you as a person and for every other person in the audience.

Go watch his show! You will see him make and maintain eye contact with every single person in that room. In the end, the show is amazing because this man is simply an hilarious artist who has inspired me to be a better one.