Pumpkin Theatre is one of Baltimore’s premier venues for child-friendly theatre. It is about to open its 44th season with Charlotte’s Web at St. Timothy’s School on Greenspring Avenue in Baltimore. In addition to Charlotte, this season features familiar titles such as Rapunzel, Alexander and the Terrible, Horrible, No Good, Very Bad, Day, and You’re a Good man Charlie Brown, as well as a new play called Clever Rachel, which is based on a Jewish folktale. With a subscription option and special screenings for differently-abled children, Pumpkin Theatre bestows the gift of high quality and affordable live theater upon the area’s youth.

I caught up with the vivacious Stacey Needle who acts as Pumpkin Theatre’s PR person as well as box office manager, to explore what makes Pumpkin a special company. Stacey also gets involved creatively by directing and even performing in some shows. She is currently directing Charlotte’s Web, which opens September 17th. 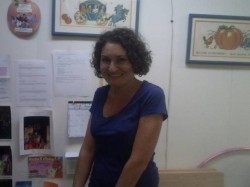 Teresa: Tell us about your first exposure to children’s theatre and give us a little background on you.

Stacey: I actually began to perform at the age of 11 after seeing a touring production of Annie. The children enjoyed themselves so much on stage I decided I wanted to perform as well. I performed at local theaters, dinner theaters, Kings Dominion, Universal Studios, until I had my own family and moved back here. I went to Goucher and earned a BA in Theatre and Communications, with an emphasis on Performance and Directing. I then decided I wanted to perform in productions that my children could enjoy watching as well.

What is your position here at Pumpkin Theatre, and what are your responsibilities?

I actually performed for Pumpkin as part of a WMAR- TV musical special called ‘Bout Baltimore, [written by MTG’s Publisher Mark Beachy] many years ago. Watch a video clip.

I reconnected with Pumpkin about two years ago. I am the Box Office Manager, performer for various shows, and director of our Mainstage and Kinderseries shows. I also teach Creative Drama Classes for ages 4-7, write our Educational Study Guides, and handle the majority of our Social Media.

How long has Pumpkin Theatre been in business? Why was ‘Pumpkin’ selected for the name of the theatre?

We are in our 44th year. The’ Pumpkin’ name was chosen because the first show we ever did was Cinderella.

Why is it important for families to bring their children to the theatre?

Pumpkin Theatre is a great place for parents to expose their children to the theatre arts – in a way that will keep their attention, enrich their minds and imaginations.

Where do you perform?

Since we have been around for some many years we actually see/hear grandparents who are now bringing their grandchildren – after bringing their children many years ago. It is amazing to see the magic of Pumpkin still going strong in families – and how the families still enjoy it! The best part is seeing the smiles on the children’s’ faces.

I understand that you have a subscription option that offers priority seating and a discounted ticket price. How much is a subscription?

A 5 play subscription is $48, 4 play is $40, and 3 play is $33. Individual tickets are $13 in advance, and $15 at the door. We are also happy to exchange tickets for another performance of the same show [with prior notification].

What do you like about working with children? Are adults cast as well?

We primarily cast adults in our shows. We do have the occasional child if the show calls for it, and the director chooses to cast a child. We like to call ourselves a theatre for young audiences [as opposed to a theater that features young actors].

Who is in your production of Charlotte’s Web?

Have they appeared in other Pumpkin Theatre shows?

Shelly and Tammy have performed with Pumpkin. The other performers are new to Pumpkin, but not new to performing in the area

Tell us about the actress playing Charlotte. 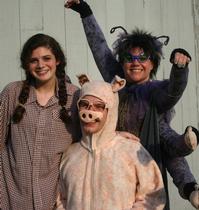 Shelly Work has performed locally for many years. She and I met while both performing in Romance, Romance at Vagabond Players. She has played the Witch/Stepmother in our production of  Hansel and Gretel, and she was in How to Eat Like a Child – both from our Mainstage shows last year. She has also been a part of our Kinderseries show 3 Little Tailsfor the past 2 years – and by popular demand we will be bringing that show back again this year. I direct that show, and we perform it at Center Stage.

Tell me about your vision for Charlotte’s Web as a director. Is there anything you’d like to add that sets it apart from the book/movie/ or other play versions?

My vision is to try and stay true to the original story, yet making it enjoyable and interesting for our audience. I have added original live music – which is being be written and performed by a local musical talent. I had her do the same for Hansel and Gretel last year. I find bringing live music to an otherwise non-musical helps the audience, especially children, to become more involved and entertained. It also helps to move along the story – and  it adds emotions.

What will families see visually on the stage?

As for the set – I try and keep that to a minimal amount so that the audience can be focused on the story and actions – instead of just being focused on the background. Also we are lucky enough to have amazing costumes, and actors in those costumes, which helps to keep the audience involved. The set will look like Southern Country – rustic, adding colors for the fair setting. The spider webs/words will also be a huge part of the set. Our lighting effects also help with this.

You have other Children’s programs at Pumpkin Theatre. Tell us about them.

We offer classes during the Fall and Winter and camps during the Summer. We also have Pathways and Kinderseries shows we offer for school groups. 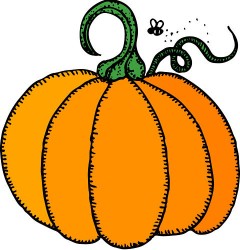