Cathy Rigby starring as Peter Pan is the performance of the season to see at Wolf Trap. A fabulous five star panorama complete with Indians, pirates, crocodile, a fairy, sparkling fairy dust, wonderful costumes, remarkable sets, an orchestra, and an all star cast which literally flies off the stage. The current production of Peter Pan is a musical production of Sir James Barrie’s play, and is directed by Glenn Casale. 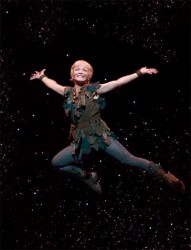 Peter Pan is the classic story of a boy refusing to grow up. The play is set in the Darling nursery, Neverland, Marooner’s Rock, and Hook’s pirate ship. It demonstrates how far imagination will take you if only you believe through a child’s eye and refuse to become grown up. Cathy Rigby is incredible as Peter Pan. She moves around the stage full of energy, athletics, and grace more reminiscent of her Olympic Days in 1968 than of a woman approaching 60. Cathy is perfect for playing the boy who refuses to grow up as she graces the stage with a body that refuses to age.

The Emmy Award winning and Tony Award nominated production has more star power than just Rigby. Broadway veterans Tom Hewitt and Kim Crosby entrance the audience as Captain Hook/Mr. Darling and Mrs. Darling/Mermaid/Grown-Up Wendy. In addition, strong performances by Krista Buccellato, who plays Wendy and understudy Jasmine Ejan who filled in for Desiree Davar in the role of Tiger Lily and Liza, delight all ages. Krista’s highlights include “I’m Flying” and “Distant Melody” with Cathy. Jasmine’s highlights include her incredible dancing talents in “Indians!” and as Liza prior to the “Neverland” (reprise).

John Iacovelli deserves a lot of credit for the wonderful set designs which moved flawlessly for each scene. Paul Rubin who designed the flying sequences is responsible for adding the extra magic to the production. Their scenes wowed and dazzled the audience both young and old. The music for the musical was a combination of a touring orchestra and Wolf Trap’s fine musicians – all conducted by Keith Levenson. The music performed live in the pit always enhanced the performance and never distracted the audience from the action on stage.

Peter Pan is an outstanding production suitable for the whole family. The musical is being performed outside at the wonderful Filene Center at Wolf Trap. Fantastic choreographed dance numbers created by Patti Colombo and performed by boys, pirates, and Indians are sure to entertain. Wonderful vocals and flying effects are a hit with the audience. Children of all ages will love Nana the dog and the hungry crocodile both played by Clark Roberts. The musical offers something for everyone.

Fly over to Wolf Trap and have a wonderful time!

Running time: 2 Hours and 30 minutes, including one intermission.