All Shook Up at The Riverside Center Dinner Theater

All Shook Up is an adaptation of the Broadway musical “inspired by and featuring” the songs of Elvis Presley. The script is based on the book of the same name, written by Joe DiPietro. The musical is a light and fluffy look back to a day in the summer of, in a “small, you-never-heard-of-it-town” somewhere in the Midwest. The premise is a classic 1950 – 1960’s theme. A young roustabout named Chad arrives into the small town of interest, on his motorbike with his standard issue leather jacket, white T shirt, guitar, and swooning good looks. He seeks the town’s motorcycle mechanic, Natalie – yes, Natalie the girl mechanic, to take care of some issues with his bike.  Natalie falls quickly and deeply for Chad, to the chagrin of the more “nerdy” gas station attendant, Dennis. Dennis has been secretly pining away for Natalie. Natalie has the standard small town dream to escape and ride off into adventure and excitement on her motorbike, with the man of her dreams.  She believes Chad is that man. 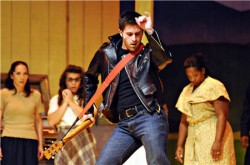 Michael Galyon as Chad in 'All Shook Up.'

However, as the musical unrolls we find that a daisy chain of love is building. Dennis falls for Natalie, Natalie grows gaga for Roustabout Chad, Chad falls for the shapely, newcomer Sandra (museum curator), and Sandra falls for Chad’s sidekick Ed. Other love rivalries arise and we discover that besides all the town’s young women swooning and fainting for Chad, Sandra has her own admirers. Also a subtle, and very indirect mention of racial tensions, is alluded to in the young love that grows between a 16 year-old ‘colored’ girl, Lorraine and the mayor’s ‘white’ son, Dean. The love tensions in the town and the admiration of the roustabout, certainly shakes up the town and leads to some changes.

Like a high-whipped buttercream frosting – the play’s premise does not traipse into any controversial waters. Like most classic musicals, the intent is to entertain through dance and song. The music is prevalent and is deftly woven into the scenes and action. The songs in the show do not have that Elvis-like sound, or even slightly impersonated. Nearly all of the songs are sung as ballads, often by ladies, and even the hard-edged Elvis songs – “A Little Less Conversation” – immediately comes to mind – are missing the bite and punch of the Elvis renditions, because they are intended to be softer and gentler, which works well in this adaptation.

The production’s choreography is original and visually exciting.  All acts infuse dance numbers with an appropriate themed Presley song.  Choreographed group numbers are the most interesting and creative and these are abundant throughout the show. Adolpho Blaire, the show’s director and choreographer wants to breathe new life into All Shook Up. His direction does not focus on Elvis’s music, or concentrate too much on the circumstances that made up the American consciousness in 1955, but he centers  on the universal themes of love, hate, and the common man.

Staging, set design, and lighting were inventive, colorful, and joyful.  Scenic Designer David Paul Stock used multiple cartoon landscapes such as in the fairground scenes for backgrounds and mixed these with realistic props such as a full sized motorcycle. Cute scenery moments involved the driving away of a 2-dimensional ‘just married’ wedding car and in a separate scene, a tunnel of love cart. Lighting Designer Phil Carlucci was used to effectively create a tone, as in the town’s Honky Tonk, or to cameo an individual character’s performance. Costume Designer Nancy Furey is able to epitomize the feel and tone of the 1950’s dressing, while using more upbeat colors, which lent themselves to the fun nature of this production Producer/Musical Director/Artistic Director Rollin E. Wehman and Associate Artistic Director/Production Director Patrick A’Hearn have used their extensive stage and musical backgrounds to bring a show they feel the Washington area will appreciate.

Overall, the musical as an examination through rose-colored and politically correct glasses of a day in the 1950’s. Like an episode of the old Dick Van Dyke Show the production was a fun and silly romp that entertained and had no pretenses to do otherwise. The musical is appropriate for those of all ages, including children.

Attendees can opt for the traditional full dinner theater experience or the show only option. Dinners include flavorful entree selections of a meat, chicken, fish, or vegetarian pasta with a salad and dessert. Top tier appetizers, desserts, and a bar menu are available for an extra fee. The facility houses a cash bar in the large reception area, and drinks are made available prior to seating for each show.

The Riverside Center Dinner Theater in Fredericksburg, VA is a popular venue for adaptations of Broadway musicals. The facility is contemporary, but imbued with the charm and graciousness of southern hospitality. The facility has hosted shows for 14 seasons. The popularity of the theater and its shows is increasing, allowing them to improve their productions and hosting headlining stars. During this season their production of Hairspray rivaled any on Broadway. Sally Struthers headlined their recent production of Hello Dolly. The management is very excited about their next production of Dreamgirls, which begins in September.

All Shook Up plays through September 12th at The Riverside Theater – 95 Riverside Parkway, in Fredericksburg, VA. For reservations, call (540) 370-4500. Reservation information is here. Ticket prices are here.