On the Road: Hugging the Shoulder, in New Orleans, Louisiana

If you are wondering why I am posting this on MD Theatre Guide there are 2 reasons: (1) To make you aware of what’s happening outside of our Washington Metro Area theatrical bubble, and (2) Because this play deserves to get a production at one of our fine local theatres. 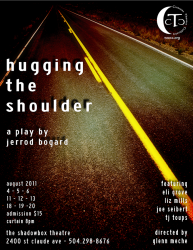 Jennifer and I were in New Orleans this past weekend and felt we needed a theatre fix. Jennifer discovered that a little company called Crescent Theatre Collective (CTC) was presenting a play called Hugging the Shoulder. CTC performs in The Shadow Box Theatre, a small black box in an area that is still being revitalized six years after Hurricane Katrina.

I had seen this play at Fringe NYC a few years ago and was surprised the play had not been picked up for a commercial run somewhere. Maybe it’s the basic plot premise: a guy throws his brother in the back of his van and drives him cross country as an intervention. Perhaps it is not what Broadway producers deem commercial, but it does deserve a theatrical life. Since the Fringe NYC production, playwright Jerrod Bogard has expanded this play from a one act into a full two act play. I was told that CTC was the first company to perform his revision.

I don’t want to give away too much in the way of plot, but I will tell you that all of the performances were really first rate. Joe Seibert as Derrick and Eli Grove as troubled Jeremy had the right amount of intensity and subtlety as the two brothers. Liz Mills’ performance as Christy, Jeremy’s girlfriend, was much more memorable than that of the actress in the NYC production. TJ Toups made a nice cameo as the Highway Patrolmen. 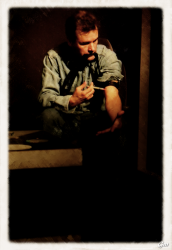 Eli Grove as Jeremy in ‘Hugging the Shoulder.’

Director Glenn Meche kept the production flowing along nicely with minimal set and lighting changes. Overall, Hugging the Shoulder has a well written script and the CTC production was a well executed production. I am hoping to see someone in our area pick it up.

Running Time: One hour and 50 minutes, including a 15-minute intermission.

Photos of the rehearsal and the production of Hugging the Shoulder.

The show played its final performance on August 20th.