“Grease is the word,” and in a word, Olney Theatre Center’s production of Grease is FUN! It’s faithful enough to the 1978 film version to please die-hard fans, but also incorporates some original flourishes to entice old musical theatre cynics as well.

The story is a familiar one: new girl on the block Sandy Dumbrowski (Jessica Lauren Ball) arrives on the scene at Rydell High School to find that her summer love Danny Zuko (David Bryant Johnson) is trapped in a clique of rebel Greasers. Will they find happiness together in spite of the pressures to conform? It’s the beloved, timeless plot-line that surely inspired Disney to create the squeaky-clean High School Musical franchise. 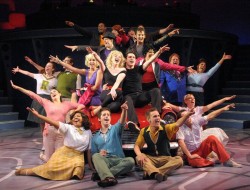 The Cast of ‘Grease’ at Olney Theatre Center. Photo by Stan Barouh.

The appeal of Grease, however, is that it makes no effort to sanitize the dark side of teenage life: teenage pregnancy, underage drinking, and peer pressure are all prominent themes here. While these issues have plagued many a high school drama director over the years (usually resolved by judicious script cutting or simply glossing over the subject), Director Bobby Smith confronts each challenging moment by embracing it: he slows the brisk pace to give each moment the time and mature treatment it deserves. This makes Olney’s Grease a perfect springboard for discussion about some rather serious topics between parents and children.

It is difficult to single out standout performances in this uniformly polished ensemble, but Smith and his team have certainly crafted some standout moments. This production boasts what has got to be one of the best renditions of ‘Greased Lightning’’ in the history of the musical (lead by the rocking Patrick Cragin as Kenikie), complete with a car transformation that can only be described as COOL! In this and every musical number, Music Director Aaron Broderick’s instrumental and vocal performances live up to all expectations, but unfortunately, the sound system doesn’t always carry the vocals over the band.

The emotional core of Jim Jacobs and Warren Casey’s (admittedly disjointed) stage play usually stems from the chilly rivalry between the pristine Sandy and tough-girl Betty Rizzo (Caroline Bowman), and the eventual respect that is forged between them. Ball and Bowman never quite make that connection with each other, but in their own worlds, each deliver powerful performances. Bowman’s knockout performance of “There Are Worse Things I Could Do” hits all the right chords. Ball’s honest girl-next-door portrayal of Sandy breathes life into the entire production, and at the risk of being stoned to death by rabid movie fans, I would submit that Ball and Johnson surpass the vocal precedents set by Newton-John and Travolta.

Johnson fares better as Danny Zuko, nicely negotiating the gap between schticky-cliquey Greaser, and the Every Boy beneath the grease who Sandy falls for. It must be noted that he also has PERFECT hair for this role. Caitlin Shea imbues Frenchy with an edge that is a welcome departure from Didi Conn’s doofus-with-a-heart-of-gold film portrayal. As Roger, Dan Van Why performs “Mooning” with such impeccably beautiful vocal technique that we nearly lose track of what a silly song it is.

There is one clear standout performance, however: Matthew A. Anderson absconds with the show in a brief cameo as smarmy Vince Fontaine. For whatever my opinion is worth, I’m ready to declare Anderson the funniest actor working in DC today. He’s like the second coming of John Belushi: the moves, the voice, the timing, and the energy. His performance alone is worth the price of admission.

On a personal note, as an arts educator in Olney by day, I must commend Olney Theatre Center for producing work that is so appealing to young people in the community. My students have never been more enthusiastic about theatre since Olney Theatre produced Annie, and I’m sure Grease and the upcoming Sound of Music production will continue to induct a new generation of theatre-lovers.

Get your tickets while you can for Olney’s terrific production of Grease! If a Wednesday matinée was sold out, tickets must be going fast!