Shakespeare’s tragedy Macbeth, the story of a war hero faced with the dire consequences of his insatiable thirst for power, is being performed by the new Impossible Theater Company, providing fresh-faced actors and sublime, intense performances. Nick Jonczak, the show’s director and founder of Impossible Theater, displays his directorial talent through intricate and fresh dance, song, and fight sequences. The set design by Lauren Cucarola is superb, as is the lighting (Leah Pope), and there are bewitching performances enveloping the audience. 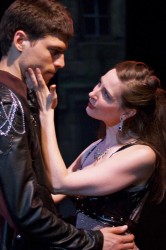 Josh Murray, as Macbeth, shows no restraint for the folly and guilt that consumes Macbeth’s mind and he performs without boundaries or inhibitions. One particularly mind-bending scene is the dinner post Duncan’s murder, where Macbeth hallucinates and, frankly, freaks out his polite guests. Murray easily fascinates, horrifies, and sparks laughter for Macbeth’s confused and inappropriate behavior, all at once. He points and yells at people that aren’t there, a funny scenario at first glance, but then seeing the terror in his eyes makes the audience think twice about the action. This is the true talent of this fabulous and intense actor.

Sarah Stephens as Lady Macbeth is a manipulative, seducing, and evil conspirator that can easily persuade that murder can be okay, as long as you get what you want. Devilishly plotting the King’s murder and then putting on a ‘good hostess’ act in front of him five minutes later, Stephens could fool just about anyone, and that is what makes her perfectly cast for Lady Macbeth. She pushes the wife’s role to another level that blasts themes of ‘appearance versus reality’ into the spotlight and proves more  than once that she is not your average desperate housewife.

Ava Jackson, Rachel Viele and Will Hayes, as the Weird Sisters, reinvent these pivotal witch parts and perform ritualistic dances and songs, one which plays upon the classic rhyme “Bubble bubble toil and trouble/Cauldron burn and fire bubble.” They are young, robed in white, with tribal tattoos hugging their wicked and sinister demeanors, an original and appropriate portrayal of the witches. While one sings, another dances, and as the last one beats a drum on the stage, they master witchcraft and enchant the audience.

This production of Macbeth is new and fresh, and exciting – filled with talented young actors, and lead by an imaginative young director. There’s not one dull moment in this powerful production. The Bard of Avon would have been proud!

Macbeth runs through August 7th at Impossible Theater Company at Warehouse Theater – 645 New York Avenue. NW, in Washington, DC. Performances continue on Saturday at 2 and 7 PM and Sunday at 2 PM. Tickets are $10.00, and can be purchased at the door or online.