Nick Olcott’s comic opera Love Potion #1, which he both wrote and directed, is based on the opera L’Elisir d’Amore by Gaetano Donizetti. Less than three years ago, Mr. Olcott directed a traditional production of L’Elisir, but as he states in the program, he encountered a problem regarding the believability issue. Could adults really buy into the scenario that was being presented? Wouldn’t this be better set in the 1950s at a Washington, DC high school that would make the audience more easily accept the frolics being exhibited on stage? So begins the fun journey that both ends and begins on the mythical Columbia High School athletic field. I really enjoyed the new change of venue, including utilizing The 1959 hit song by The Clovers – “Love Potion #9,” which is ingeniously incorporated as background music during the second act as the power of the elixir is being tested. 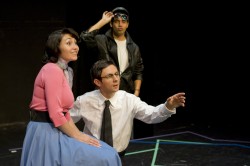 As you enter the theatre, you notice four musicians in the back center stage. On one side of the stage a sign identifies the name of the high school and a baseball scoreboard is on stage right. Bleacher stands are set up in front of these set backdrops to accommodate the eleven members of the cast that utilize the height as necessary to communicate with the audience. Carla Hubner, the Artistic Director of The In Series welcomed the audience and reminds them that what they will observe today is an  adaptation not a translation of the original opera.

Nemorino, convincingly portrayed by Tenor Pablo Henrich Lobo, is a social outcast, but a math whiz. In “She’s my angel,” he hands his love Adina, (sung in a crystal clear soprano by Laura Choi Stuart), a flower to symbolize his feelings. Rejection is immediate as the words “let me get my rocket ship for my journey to the land of the useless” is sung. So begins our journey into the ups and downs of high school romantics. As the words of the opening number are sung in both Spanish and English, you get some appreciation that you are stepping forward on a theatre adventure, but unsure as to its destination. 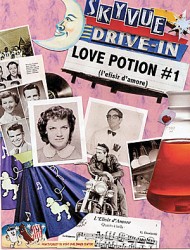 One hears sounds of a motorcycle and Belcore, expertly played by Baritone Alex Alburqueque, arrives on the scene (like Elvis) in full leather regalia and sunglasses to sing “Come on, baby, let me take you out for a ride” in which he asks Adina,“tell me what you need Babe…I’m just handsome and I‘m just handsome….I can dig you, you can dig me.” Balcore, unlike Nemorino, falls in love with Adina (in only five minutes), setting up the question, “Who is going to win Adina’s heart?”

The plot begins to take focus as we meet Dulcamara, played by Jarrod Lee, the school chemistry nerd, who has developed an elixir that will produce instant attraction and love. In “What I mean is …”, he offers to sell the elixir to Nemorino, and of course everyone else wants a taste. As you can imagine, the plot takes many twists and turns.

The 4-piece musical ensemble, conducted by Francis Conlon, included three violins, a cello and a piano (played Mr. Conlon). They accompanied the fine cast with emotional fervor. Yet, the placement of the ensemble was a problem of distraction. Their location was center stage against the back wall – dead center in the middle of all the action. In some very heart-rendering musical numbers, you could see the conductor’s hands moving up and down. He was far too close to the performers and very distracting.

Andrew Scharwatch’s Lighting Design and Nick Olcott’s Sound Design were very effective supporting the cast as they were harmonizing  (sometimes in multiple octaves and ranges) and during the emotional scenes. The use of spotlights helped to focus the singers away from the rest of the cast who were on the stage.

There is superb singing by every member of this cast and the numerous harmonies are divine, as they sing their musical numbers both separately, consecutively, and together and move the plot along. The singing was so beautiful that I closed my eyes to appreciate the vocal talents onstage.

Love Potion #1 is filled with many vocal pleasures, lots of humor, and a fast-paced story. Lovers of the original opera will be humming along and laughing at Nick Olcott’s funny new lyrics. It’s the perfect potion for a grand night at the opera.