ReEntry at Round House Theatre

I am not sure what compelled me to jump at the chance to see and write about ReEntry at Round House Theatre in Bethesda, MD, but I did. I learned about the production when viewing another play and just reacted. As I am not a compulsive sort by nature, but an overanalyzing, pseudo science-type – I progressed towards the downpour facing me with trepidation. However, as I jaunted into the theater… I wondered again about the irresistible, pull, attracting me to this production. Sure, I have military family and close friends. Yes, there are things I don’t know about their various wartime experiences. And for sure, often I feel inadequate in trying to discuss or relate to this time in their lives. However, all I really knew about this play was it involved personal stories of troops returning from Iraq and Afghanistan, ‘reentering’ civilian society. Not knowing much more than that…I was bracing for perhaps a tense/intense or even angry and confrontational production. What would I encounter and was I prepared? 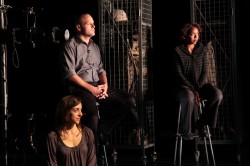 In the pre-play discussion, the playwright KJ Sanchez deftly explained the ‘rules of engagement’ for this production. This was not a piece dealing with politics, known battles, or well established facts (Yay!). The intent of the play was to explore the combat veteran’s “…experience of returning home…and how we, as families, as a culture, a society, and as a country can help.” A noble intent; however is that truly what the production does? My opinion is a resounding ‘Yes!’

The playwrights (KJ Sanchez and Emily Ackerman) recognized that the topic of ‘reentry’ is broad, so to create some ‘boundaries’ and to generate an authentic and relevant dialogue they chose to narrow the scope of their work. Decisions can be difficult, and can be misrepresentative of the experience as a whole, but the choice to concentrate on the Marine Corps and the stories of a few individuals, to me, was the correct move. The playwrights used dialogue straight from the interviews of Marines. It’s apparent a level of trust and respect had been gained by the troops and this led to authentic exchanges from the vets. I was genuinely and surprisingly riveted from start to end!

It’s often difficult to discuss a work that profoundly affected you without sounding trite. I was surprised how impacted I felt during and after the production. This was a subtly emotional work that wasn’t intended to beat you over the head with a message…but to allow you to experience the life and thoughts of the vets upon their return to the states. The play is truly about the different experiences, perceptions, and reactions (of both marines and their loved ones), of their return home. As a Marine – duty, responsibility, a sense of discipline and ownership is part of the psyche. The dialogue that is relayed in this work speaks of the need for this sense of duty and belonging…for the most part, in a non-judgmental and non-confrontational manner. The sense of ineptness and helplessness of the some of the vets and their respective families is also apparent. Using cliché adjectives….yes, this work is poignant, powerful, and thought-provoking. It’s a psychological exploration of individuals and society….and how we can try to allow people to resume their sense of self-worth and their bearings.

To complement the play’s approach and the engaging transcripts, was the remarkable and amazing cast! All of the actors were beyond excellent and there appeared to be a sense of ‘pride and responsibility’ to portray their respective ‘characters’ with the appropriate gravity, genuineness, and respect that was deserved. But that’s not to say that there weren’t moments of humor, utter helplessness, crassness, and pure joy interspersed throughout. All the actors portrayed multiple roles and personas deftly. Larry Mitchell, the Commanding Officer epitomizes the standard of a Marine officer and you’d be hard pressed not to think he had spent some time in the USMC! Sameerah Luqmaan-Harris, as the Mom and Maria easily transitioned from the factual, rational, nurse-mother…to the SoCal, African-American gunnery sergeant’s wife – decades younger, with a drop of her sweater around her waist. Magic – and utterly convincing! Ben Rosenblatt, also ‘signaled’ his metamorphosis from Charlie the 18 year old Marine brother to Tommy the “way too cool” and frank, Hispanic, Marine friend…with the slap on of a pair of sunglasses and a smart Alec change of attitude. Jessi Blue Gormezano portrayed the suave, NY city sister of two brothers in the corps and Suzanne a now divorced wife of a Marine. Brandon Jones is John the older Marine brother and Pete the severely injured husband of Maria – who struggles with the reality of losing his Marine ‘family.’ 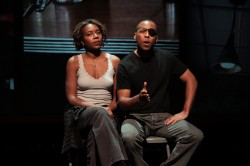 Minimalism in costuming and set design was employed in the production. Costume Designer Marion Williams used key characterizing items…a sweater, a pair of sunglasses, an eye patch as a costuming device to indicate different characters and attitudes. The only full costume was the use of ‘dress blues’ in a formal scene towards the end of the play. Set design was also minimal but was used to emphasize specific scenes and scenarios. A bar scene used interactive video, a discussion from the CO to Marine parents juxatpositioned his message with a Marine recruitment video…emphasizing two very different extremes of a young recruit’s potential. Lighting Designer Russell H. Champa and Co-Designer Dani Clifford, work with Sound Designer Zachary Williamson, and Projections Designer Alex Koch and Stage Manager Denise Cardarelli to create a respectful and ‘subliminal’ set, one that accentuates a characters message without overwhelming it.

ReEntry is hard to characterize. It’s an engaging, psycho/social examination of the return experience. The work is not moralistic or preachy…but a yearning for understanding and patience for our vets of this war and previous wars. However, please be advised, the work is not intended for audiences other than adult.

Run time: 90 minutes, with no intermission.