The Who’s Tommy at American University

With a stark white curtain and long white catwalk stretching out through the first part of the audience, the American University’s Greenberg Theatre seems oddly like it’s set up for a fashion show. And then the popular score written by The Who’s Pete Townshend fills the theatre. 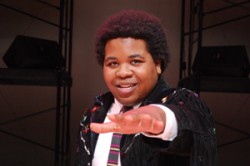 Tommy is a not-safe-for-children rock opera following the life of a young boy, Tommy Brandon Deane (4 and 10-year-old Tommy), and the older Tommy (Eddie Leavy) who becomes deaf, dumb and blind after being told “You didn’t hear it, you didn’t see it! You won’t say nothin’ to no one!” repeatedly by his mother (Hilary Morrow) and father (Brian Slayton) after witnessing a murder at the age of four. Unable to interact with the world, Tommy is subject to years of abuse, until he finds his calling as a ‘Pinball Wizard.’ Thrown against the backing of The Who’s music, it is an overall trippy, and disturbing, and powerful experience.

The opening sequence is done with a combination of pantomime and silhouettes using cutouts behind the white curtain -an effect masterfully done both by actors behind the curtain and the Lighting Designer Jason Arnold. Without much more than facial expressions and shadows, Tommy’s background and birth are outlined in a way that is both amazingly interesting to watch, and easy to understand.

The story and lyrics of Tommy are is so important to this show, but unfortunately the incredible band drowns out the talented singers most of the time,  and it quickly becomes apparent that the singers on stage are no match for the very adept band, with some of the microphones barely audible and the ensemble completely lost – and, perhaps even worse, Leavy (in his role as older Tommy and Narrator) is nearly incomprehensible using his handheld microphone. And it’s a shame because I am a rock opera fan and I wanted to follow the story. I am confident, however, that this problem will be rectified before tonight’s performance, and that the production will become a 5 star production as the run continues.

There are some some brilliant physical performances. Eddie Leavy and Brandon Deane manage to be both endearing and tragic as the younger and older Tommys. Matthew Rubbelke, playing Tommy’s abusive cousin Kevin, likewise manages to be chilling, fully committing to his ‘evil’ role with both his movements and facial expression, managing to be both scarier and more interesting to watch than perhaps the most villainous character ‘Evil Uncle Ernie’ (Tim Harmey) who abuses Tommy in much more disturbing and graphic ways than Kevin.

However, for all of actors in supporting roles who were given a chance to shine, one clearly emerged as the star of the night. Haely Jardas, both The Acid Queen for one scene and a Lass in the ensemble, managed to steal every scene she was in, changing from a dangerous acid-fuelled transvestite to a screaming fangirl in her two parts and embodying each so completely that it was difficult to place that the enjoyable girl in the background was the same one that was able to powerfully strut as the Acid Queen few scenes before. Jardas was able to both match the band and embody the rock persona needed to make much of The Who’s music thrilling. Though just as disturbing as many other parts of the play, Jardas’s performance was the most appreciated by the audience, receiving both applause and cheers as she left the stage.

Overall, American University’s production of The Who’s Tommy is riveting and disturbing. The opening sequence is directed brilliantly for storytelling, the lighting and costume design are both stunning throughout, and many of the actors shine.

The Who’s Tommy plays through October 29th at The Harold and Sylvia Greenberg Theatre  – 4200 Wisconsin Avenue in Washington, DC. To purchase tickets, call (202) 885-ARTS, but them at  the the box office starting an hour before show time, and/or online.