The Blind Boys of Alabama at The Music Center at Strathmore

Oh, what a night! In a performance that was simply joyous, The Blind Boys of Alabama had Strathmore audiences singing, clapping, laughing, and dancing in the aisles from the moment they took the stage. With a career spanning more than seventy years, the five-time Grammy Award-winning artists have had plenty of time to hone their craft as both musicians and entertainers,  and they are pros at both. On top of it, the love they have for each other and for their audience is clear and contagious, resulting in a concert experience nothing short of a ‘love fest.’ 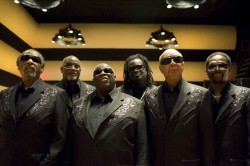 The Blind Boys of Alabama. Photo courtesy of Strathmore.

The evening opened with a solo performance by Jim Lauderdale, a multi-talented country and bluegrass performer and a leading Nashville songwriter whose songs have been recorded by artists including Patty Loveless, George Jones, The Dixie Chicks, Kathy Mattea, Lee Ann Womack, Blake Shelton, Vince Gill, and George Strait. Accompanying himself on guitar, Lauderdale’s performances of “Why Do I Love You” and “Like Him”, both of which he composed, were particularly soulful.

With cheers from an audience seeming to anticipate what they knew would be a spectacular evening, The Blind Boys of Alabama made their way across the stage in a train-like formation, guiding one another with well-rehearsed ease. The voices of vocalists Jimmy Carter, Eric “Ricky” McKinnie, and Ben Moore, blended in beautiful harmony, and their interpretation was outstanding. Backed by music director Joey Williams on lead guitar, Peter Levin on keyboards, and Tracy Pierce on bass, all of whom exhibited exceptional talent, their set wound from gospel to country and back.

Jimmy Carter, with his great vocals and crowd pleasing personality, had the audience wrapped around his finger throughout the night. Holding notes for measures on end, twirling around on stage, and running up and down the aisles of Strathmore seemingly oblivious to the fact that he is both blind and past the age when many men his age can even walk, 78 year old Carter, the sole surviving member of the original group, had the audience rushing to shake his hand, give him hugs and plant adoring kisses on his cheeks. The audience loved him when he sang, and they delighted in his unabashed promotion of the cds the group had for sale, including those that had already sold out. Encouraging the laughing crowd to buy because the Blind Boys love to eat and need money to shop for food, he gleefully reminded all that even the sold-out CD, “Take the High Road”, could be purchased online.

Early on in the evening, Carter wowed the audience with his rendition of ”Down in the Hole”. Ricky McKinnie followed with a powerful performance of “God Said It,” and “That’s Good Enough for Me.” The evening featured three songs from the Blind Boys’ new country gospel recording “Take the High Road,” including “Take the High Road” and “Jesus Built a Bridge”, which the group performed with Jim Lauderdale, and “I Know A Place”, which featured the stunningly beautiful and smooth voice of vocalist Ben Moore.

Another highlight of the evening was a full group performance of “Free at Last” a soul stomping song based on the famous Martin Luther King Speech. With Jimmy, Ricky, and Ben all dancing and grooving in their own unique styles while belting out vocals that were backed by their amazing band, the crowd was on their feet through the entire number. A beautiful arrangement of The Blind Boy’s signature song “Amazing Grace” set to the tune “The House of the Rising Sun” followed.

In a night that found both believers and nonbelievers cheering on the treasured The Blind Boys of Alabama, winners of Lifetime Achievement Awards from both the Grammys and the National Endowment for the Arts, nobody seemed anxious to leave, including The Blind Boys. As Jimmy thanked the crowd for coming, he let everybody know that the group would anxiously await its next invitation from Strathmore, but that on their next visit they would appreciate some good Southern cooking served on a warm plate … because The Blind Boys of Alabama love to eat.

All too soon, the night was over, but not before yet another standing ovation brought the Blind Boys, joined by Jim Lauderdale, back onstage for a rousing encore performance of “I Saw the Light.” Let’s hope they come back very, very soon.
__
Watch a video of the making of the Take the High Road CD.

Watch The Blind Boys of Alabama perform “Free at Last” at the White House Celebration of Music from the Civil Rights Movement.