Spamalot at the The Lyric in Baltimore

Always look on the bright side of life, especially if you find yourself lost in a dark and very expensive forest. Or in the middle of downtown Baltimore as you head to The Lyric Opera House to see the winner of the 2005 Tony Award for Best Musical –Monty Python’s Spamalot – presented by Phoenix Entertainment. The show is lively, bursting with musical numbers that will keep you laughing from the first encounter with Sir Arthur and his knights – all the way to the company bow. Both fans of Monty Python and newcomers to the Python humor will thoroughly enjoy the ride as the quest for the grail begins. Picture a gaggle of men, ranging from brave and sword-wielding to cowering and pants-pooping. Did I mention they’re all in tights? Add glitter, big musical numbers, a coconut horse, the Lady of the Lake, and the Knights who say ‘Ni’, and you’re all set for a fabulous production. 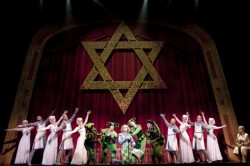 The cast of ‘Spamalot’ singing “You Won’t Succeed on Broadway if You Don’t Have Any Jews.” Photo courtesy of Phoenix Entertainment.

The costumes are absolutely stunning. There’s so much glitter and sparkle that you feel dazed just looking at the performers at time. The bright colors scream Broadway even if it is a touring show. Designed by Tim Hatley, you can look forward to gorgeous sparkling dresses that highlight the diva of the show, The Lady of the Lake (Brittany Woodrow). She dazzles in the light in no fewer than five outfits, each one a unique design speaking levels of just how important she is, or at least how important she thinks she is. The flowery flamenco frilly outfits are perfect during the disco number in Act II, really creating the atmosphere of a burning-hot nightclub. The overall effect of the costumes is dazzling; you can’t take your eye off them at times, especially during the big dance number in Camelot.

And a large nod to the success of this production must go to the choreographer, Casey Nicholaw. As a Tony, Drama Desk, and Outer Critics Circle nominee you would expect no less (He won the Tony this year for his work in The Book of Mormon). The dances are entrancing, with near-perfect synchronization and breath-taking tap-routines that make you burst into applause. As the actors move; spin, jump, side-step, you want to move with them. It feels organic and well-rehearsed; a complex level of entertainment that is well worth watching.

With all the razzle dazzle of the costumes and the dancing  – the actors are right on the level of enthusiastic performance to really keep the show on fire. Stunning performances from the ensemble create a great background for the supporting players. They sing in perfect harmony, strong and united, dancing and smiling with huge emotive expressions on their faces; the boys in particular know that there are no small parts in a Broadway-scale show. Scene stealers include James David Larson in his dual role of ‘Not Dead Fred’ and Prince Herbert. His comical dancing and high-kicking swings are reminiscent of an unhinged scarecrow and so very lively for a character who just finished being dead. And then he turns around and sings a beautiful falsetto as the not-so-closeted Prince Herbert, waiting rescue high in his tower. Whenever Larson sings he draws the attention to him with a dazzling smile and gorgeous voice, even when he’s a little girly.

But our shining diamonds in the rough poke through at various moments; The Brave Sir Robin (Kasidy Devlin) and Sir Lancelot (Adam Grabu), who is later featured as King Ni. Devlin has a shining moment late in Act II when he bursts in his main solo of the show, “You Won’t Succeed on Broadway if You Don’t Have Any Jews.” You feel his belting below as he cries out the hysterical song at the top of his lungs, projecting his voice from the stage to the rafters and back. With a huge grin, fancy footwork, and enthusiasm like no other – he steals the show in this moment as he gives it his all. Be sure to watch out for this number. Grabu has a similar performance, also late in Act II, where he professes his deep longing for acceptance from his bully of a father. He breaks down with such desperation and anguish written on his face that you almost want to cry, but you don’t because he bursts into a big musical song and dance. Be sure to keep your eye out for these two show-stealers.

But the real prize is The Lady of the Lake. Brittany Woodrow belts her heart out during the show, finding her own unique jazzy style to really own the character. It’s often difficult once a show has made a debut with a large celebrity cast to find the uniqueness of the character without copying the originator of the role. But Woodrow has no trouble as she wails her way to the top; sparkling and shining in her glorious gowns. Her voice is uniquely her own and so powerful that it will blow you right out of your seat. She commands her role as diva to perfection, especially during her big solo number “Whatever Happened to My Part?” Woodrow belts in anger and frustration that she’s been deceived by the producers, truly giving that sense of over-inflated ego despite her raw talent. A true masterpiece to watch on the stage.

The thing about this particular production that struck me as amazing was all the little hidden theatre references. I love a good musical that can give homage, however hilarious, to other musicals. Be on the lookout for references from Les Miserables, Fiddler on the Roof, Dreamgirls, West Side Story, and others. My personal favorite being during the number, “The Song That Goes Like This,” where the stage floods with fog, all of the Laker Girls pick up large candelabras, the Lady of the Lake and Galahad (Jacob L. Smith) float in on a boat and a chandelier drops from the fly tower. And at the end of the over-dramatic number the chandelier “crashes” down. A beautifully hilarious tribute moment if ever there was one.

So life is really up to you, and you must choose what to pursue. Pursue this amazing piece of Broadway on tour and at the end of it, I promise, you will find your grail. Find your grail!

Watch a video preview of Spamalot.