‘A Quick 5’ With Derek Smith 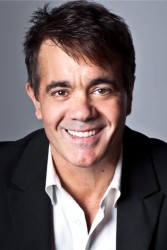 Derek Smith is currently starring in Much Ado About Nothing at Shakespeare Theatre Company. Previous STC credits include The Merchant of Venice, The Doctor’s Dilemma and The School for Scandal. On Broadway, Derek has appeared in The Lion King, Timon of Athens, Jackie an American Life and Ring Round The Moon. Other credits include productions at Theatre for A New Audience, The New Victory Theater, Second Stage Theatre, and Playwrights Horizons.

How many years have you been acting professionally?

I’ve been acting professionally since 1984.

Where and with whom did you train?

I studied/trained at Juilliard with an amazing faculty…and, in particular, Michael Kahn.  He was a key figure in accepting me into the Juilliard school.  He was my teacher and mentor…and then, to my great good fortune, my colleague over these many years.  Michael gave me my very first acting job….and many since then.  He’s directed me in three of my most glorious experiences.  Romeo and Juliet (Shakespeare Theatre Company), ‘Tis Pity She’s a Whore (American Repertory Theatre) and Henry IV Parts I and II (Shakespeare Theatre Company).

Julie Taymor has been in the news a lot for Spiderman, and you have worked with her on The Green Bird and The Lion King. Tell us about your experiences working with her.

Julie Taymor has also been a key figure in my career.  I’ve worked with her four times. We worked on The Green Bird three different times until we finally had it in shape for its Broadway run. It was also one of the most amazing experiences in my career. My rehearsal process with Julie was totally collaborative and improvisational. We had a camera in the rehearsal studio and we taped everything we did, looked at it later, and chose what we would eventually “use”……she is an amazing artist…..and we created something quite magnificent together in The Green Bird.  After that show closed, she put me into The Lion King on Broadway where I’ve worked on-and-off for a decade. It is also a beautiful show, as everyone knows, but a different kind of experience. 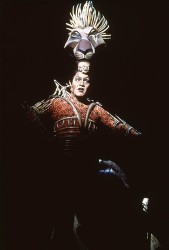 Derek Smith as Scar in ‘The Lion King.’ Photo by Joan Marcus.

I was not the original Scar  I went into the show after it had been running for 2 years. So, it was the first time I’d ever stepped into a role…and a huge role with a huge cast and a huge set and a huge orchestra!!!  So, another first for me.  But a huge part of my life. That show is in every fiber of my being at this point.

I don’t know what to say about Spiderman. I really don’t know the particulars of the drama between Julie and the producers and the rest of the creative team. I do know, from even very recent experience, that things go awry for many different reasons. A piece of theatrical art is a fragile, living thing. It is created by human beings with all their extraordinary talent and goodwill….and it is also vulnerable to their individual opinions, moods, egos, etc…..add money into that mix….and well…………………….

So, my respect for Julie is boundless. And this business on any level can be difficult. So, enough said.

Which playwright’s work do you enjoy performing the most?

Which playwright? THAT is a tough question.  I love so many playwrights. I’ve worked on so many classical plays that challenge and amaze me. Shakespeare of course. I have such an awe for people who write plays that I love them all. In particular Shakespeare….the human condition has never been so completely examined from so many different and timelessly true perspectives.

For our modern playwrights I have a particular fondness for A.R. Gurney. I originated a role in his play called Sylvia, and I played it for over a year. It was one of my favorite jobs; I hope to revive it one day.

I also think that Tony Kushner is the most amazing poet of our lifetime.  His work is true modern poetry in my opinion.

After Much Ado About Nothing, what projects will you be working on?

After Much Ado About Nothing……I wish I had even one solid project to talk about….let alone the “few” you ask about.  I don’t know what’s next.  I would like to do a play called The Government Inspector…some place, some day. So I’ve worked on that.  Maybe in Washington, maybe N.Y.  I don’t know. Actors have little power. But it is a play, and a role, that I would love to do. It’s the original situation comedy.

LINKS
Watch Derek Smith as he discusses Shakespeare Theatre Company’s production of Much Ado About Nothing, in which he plays “confirmed bachelor” Benedick.

Watch an interview with Derek on the Broadway Channel talking about playing Scar in The Lion King.