Good morning Baltimore! Get ready to meet the nicest kids in town as Musical Theater Center welcomes you to the 60s with their fabulous production of Hairspray. The costumes are fantastic, the musical numbers are buzzing with life, and the choreography is amazing. You’ll be tapping your toes and yearning to sing along to this upbeat classic playing for a limited engagement in Rockville, Maryland. And Marc Shaiman and Scott Wittman’s score is sung with great joy and conviction by the cast of wonderful singers. 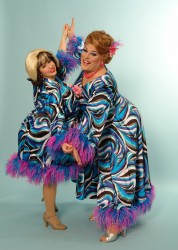 Ivanna Barrientos as Tracy Turnblad and Lawrence Munsey as Edna in ‘Hairspray.’ Photo by William Forehand.

It’s the story you all know and love of Tracy Turnblad (Ivanna Barrientos) and her dream to dance on the Corny Collins show. The fast-paced high-energy musical takes place in the early 60s where segregation is still prevalent in Baltimore and only the thin girls are part of “the in-crowd.” But everything gets sprayed up with great characters, fun songs, and lively dances.

I’ll jump straight to the point. You will be hard pressed to find as talented a group of young actors as you will see in MTC’s production. They are brilliant beacons of raw talent shining into the audience with dazzling smiles, powerful voices, and incredible dance skills. They create an incredible show that will impress you with the level of professionalism radiating from such a young group; some of the performers being as young as 13. Directed by Brad Van Grack, the show from start-to-finish is a fun-filled adventure that keeps you engaged with all of the wonderful young actors singing their hearts out. 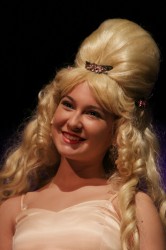 Choreographers Diane Hamilton and Erica Hilburger let loose a form of spectacular magic for this production. Consulting with Tyrick Wiltez Jones (a member of the Original Broadway Cast of Hairspray) these two ladies create incredible dance routines for this youthful cast that engages the audience every step of the way. Each of the big dance numbers, from “Nicest Kids in Town” to “You Can’t Stop The Beat” are filled with perfectly synched movements, spread out across the vast space. These choices keep the stage looking full and the energy levels high as the show progresses. It’s exactly like you’d expect it to be – incredibly vibrant and flashy with a professional quality to its execution. Star dancer alert: Seaweed (guest performer Jason Phillips) can dance. Phillips gets his groove on when introducing new moves to Tracy (Barrientos) and shows exceptional skill when performing during his solo number “Run and Tell That.” 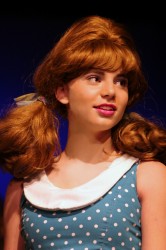 The show includes stellar performances from a very powerful ensemble and many soloists who captivate the audience to the edge of their seats. We find the characters we love to hate in Amber (Lauren Blitz) and her mother Velma (Olivia Rubbo). Blitz has the perfect fake smile, wide and almost frightening in times as she struggles to be the epitome of TV-perfect. Her laughter is cruel when she pokes fun at Tracy and when she sings her smile gets even bigger, during her number “Cooties.” Rubbo, as the wicked Velma Von Tussle gives us a similarly sly performance but she’s much less covert. Her physicality is pointed, her tongue is vicious and her expressions are sharp. Watch out for her power-packed performance in “Miss Baltimore Crabs” where she oozes a villainous voice to make her point. 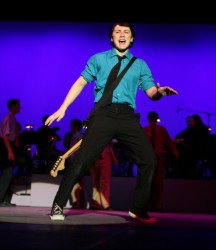 Hold onto your hearts because they just might get stolen by rising star Link Larkin (Noah Kieserman) who exudes the epitome of teenage heartthrob. Kieserman is charming, sleek and when he sings you can’t help but swoon. His solo number “It Takes Two” has every eye in the audience solely on him. And his facial expressions are typical of a young love-struck teenager, creating a very believable character in his portrayal of the young rising stud.

But the facial expression queen is Miss Penny Pingleton (Bailey Lehfeldt). With an adorable squeaky voice and nerdy one-liners Lehfeldt delivers great comic relief through her character. During “I Can Here The Bells” you find yourself following Lehfeldt in her own little world off to the side because her expressions are so exaggerated and hilarious. And watch-out for the finale when she discovers a deep belt in her voice and tells the audience how it is in “You Can’t Stop The Beat.” 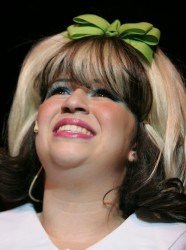 The star of the show is Ivanna Barrientos as Tracy Turnblad. From the moment she opens her eyes in bed during the opening number “Good Morning, Baltimore” she’s radiating hope and excitement to the audience. Barrientos plays a starry-eyed Turnblad with big dreams and just the right level of spunk. When she’s happy she’s really happy and when she’s conflicted or sad, it shows. When interacting with The Dynamites (Kendall Hamilton, Kayli Modell, and Oumou Traore) during “Welcome To The 60’s” her facial expressions are responsive and reactive. She really appears to be enjoying herself. And when Link is singing “It Takes Two” her interactions with Corny Collins (Aviad Bernstein) are priceless – practically crawling over the stand to get to him while struggling against Bernstein and trying not to look too disappointed when she gets pulled back. Barrientos has a powerful soulful voice that takes on a range of songs, filled with emotions that translate clear as day to the audience when she sings. A brilliant performance from a lively youth that is not to be missed. 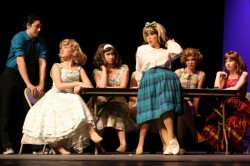 ‘Scene Stealer’ alert! Rachael  Schindler of the ensemble is an absolute must see! You’ll know who she is when you see her because she’s the one with the facial expressions to catch your eye in all the big group numbers. Schindler is also the girl throwing herself at Link’s legs during “It Takes Two.” Be sure to watch her throughout the show as she catches your attention throughout with great vivacious personality gleaming on her face. 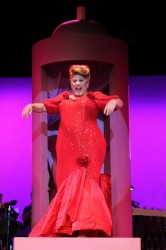 There’s also a show-stopping performance given from guest performer Lawrence Munsey. Taking on the role of Edna Turnblad, Munsey storms the stage like no woman you’ve ever seen. He’s passionate, committed, and hysterical. He too exudes a great deal of expression and when he dances you just can’t help but want to get up and dance with him. The chemistry between Munsey’s character and husband Wilbur, played by Michael McCarthy is hilarious. Their number “Timeless To Me” involves spinning and dancing and zingers worthy of a hearty laugh; trust me, you’ll feel the bells on this one.

A special nod to Music Director Barry Hamilton and his fabulous group of musicians.

So drop everything, grab your Ultra-Clutch and slide on over to the MTC production of Hairspray.

Running Time: Two hours and twenty minutes, with one intermission. 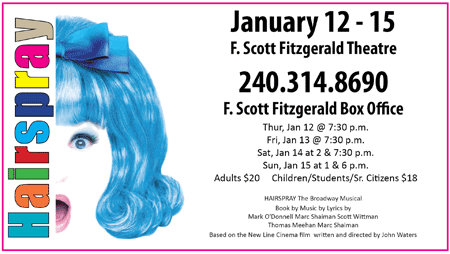 Hairspray plays through January 15, 2012, and has five remaining performances with alternating cast members – at Musical Theater Center at the F. Scott Fitzgerald Theatre –  603 Edmonston Drive, in Rockville, MD. For tickets please call (240) 314-8690, or purchase them at the box office.