There is something truly magical about snow and there are truly magical moments captured in the wonderful snowy performance of Almost, Maine presented by 1st Stage. The audience becomes the snowflakes in the snow globe waiting to be whirled to life by eight little moments of love. The story is an all encompassing globe of love: puppy love, hidden passion, love lost, burgeoning love, and many that fall in-between. And this intricate play makes love so much more than a theme as it takes the heavy emotion and actualizes it; making it tangible in the most imaginative ways possible. 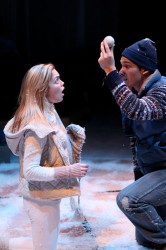 From the moment you enter the set you are brought into the winter wonderland that is northern Maine. Set Designer Steven Royal creates a snowy landscape— words do not do it justice. You would almost expect to find it in a Thomas Kinkade painting— only it’s on the ceiling mostly. There is a large snow-covered evergreen that hangs from the center of the ceiling and it is surrounded by a circle of snowy houses all nestled quietly in a cozy wintery township. There’s a mirrored floor covered with snow and it even snows periodically throughout the production. Coupled with the serene instrumental piece designed by Derek Knoderer, which is played before the show and during intermission, the set has a dreamlike quality; truly enchanting and very appropriate for the show that unfolds there. It really is like being at the top of the snow globe as the snow globe is upended and shaken around – all the snowflakes falling down everywhere.

Director Michael Chamberlin takes the power behind playwright John Cariani’s work and brings it to crisp, wintery life right before your very eyes. There are many striking moments that breath-taking and beautiful but none so stunning as the opening image. Four actors appear on the stage as snow showers begin to rain from above and there is a frenzied swell of music as these actors move in slow motion but then suddenly begin to whirl around in a frantic spell before slowing down again. This continues as the music builds and the snow continues to fall until they are all whirling faster and faster and then they finally collapse on the snow; almost as if bringing the notion of a mild snowstorm to life through their physicality. This and many other brilliant picturesque moments attest to the sheer genius that Chamberlin has put into this show.

Cariani’s work is themed by love and in a most unique fashion; he actualizes it – makes it a tangible representation and in doing so Chamberlin brings to life these notions of love as an object you can hold, touch, give and take. Carrying a literal broken heart in a bag, huge garbage bags being hauled into an apartment as a bitter girlfriend returns all the love her boyfriend ever gave her and then demands all the love she ever gave him back, falling all over the ice unable to get up as a couple realizes they are falling in love with each other – these moments shape and define the profound notions of love throughout the show. It’s a mind-blowing concept that is so perfectly rendered in this production that audiences will be amazed. 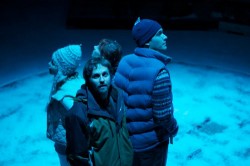 The cast of 'Almost, Maine.' Photo courtesy of 1st Stage.

The performances are stellar. Each actor takes on four or five roles in the stories that are loosely connected by location and references to the characters from the other stories. The one thing that can be said with absolute certainty of these four performers is that they all have vastly expressive faces, strong physical portrayals, and an incredible connection to the text as they speak. Their interactions with each other are displays of pure emotion radiating from deep within their character’s hearts and they shine out through the eyes and words of the actor so brightly that the room fills with the notions of love, heartache, and so much more throughout the entire performance.

Jessica Shearer takes on many exuberant roles – being the quirky upbeat characters throughout most of the show. Shearer masters many different physical expressions for the duration of the performance; none more poignant than her dreadful awkwardness as Sandrine, a popular girl who gets caught up telling her ex that she’s now getting married. She leans to the side with pained expressions of guilt and anguish, the nervous anxiety glowing through her body like fluorescent track lighting. And although most of her characters are played at the same heightened level of urgency with emotional bubbles bursting forth from here like a snowball colliding with its intended target, Shearer has a subdued moment that nearly brings audiences to tears as she plays Phil, a somewhat unintentionally neglectful wife. Her sorrow in this story is unbearable as she shares it with the audience and in the very next scene she’s switched right back to an energized urgent character. A stunning performance is seen in all of her roles.

Elliott Kashner is a quieter character in general though he shares several scenes with Shearer’s characters, creating a nice pair of opposites on the stage. Kashner speaks clearly and articulates his love in ways that most people only dream of ever doing. His defining characteristic is the way he physically plays off others. First with Shearer in the opening number where they are rolling about in the snow, leaning against one another and having fun. But Kashner is the epitome of physical comedy as Chad during his scene with Jonathan Lee Taylor. They are two country boy best friends sitting on a bench ice fishing and as the dawning realization that they have fallen in love with each other comes to light Kashner starts slipping on the stage. His body drops right out from under him, feet flying up into the air as he struggles to get back onto his feet. This happens many times between the two of them  until they are both scrambling around like turtles on speed to get to their feet, only being able to do so by supporting each other.

Jonathan Lee Taylor is another quiet character who has many quirky moments throughout the show. His defining moments are often seen through his zany facial expressions which vividly reflect his reactions to other characters. In the moment where he is East, and he physically takes the broken pieces of Glory’s (Megan Dominy) broken heart, there is something terribly raw and real happening in that moment as he attempts to mend her broken heart. Taylor finds himself completely consumed by a quirky character when playing Steve a savant with a pain-feeling disorder. He is methodical in this role, repeating physical gestures, facial expressions, speech patterns and it heightens the experience for the audience getting to see a man who truly experiences the world differently than most other people do. 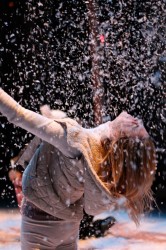 It's snowing in 'Almost, Maine' at 1st Stage. Photo courtesy of 1st Stage.

And the scene stealer of the show is Megan Dominy. Her first performance as Glory is intense. She is a hiker with a conscience and emotions that she wears on her sleeve, on her face, even carries around in a crumpled paper bag. Dominy emanates her bubbly nature the nervous, erratic almost spastic character who has come to pay her husband’s final respects by watching him float by in the Northern Lights. When Dominy becomes Gayle, the long time lover scorned who hasn’t been proposed to she’s laugh out loud hilarious. Dominy storms the stage in this scene with uptight physicality, letting her scorned love show in her terribly tense physicality and the way she drags the garbage bags filled with all the love Lendall (Elliott Kashner) ever gave her onto the stage. She insists with frightening vehemence that he not only take back all the love he ever gave her but also that he return all the love she ever gave him. She even takes a point to jumping up on the chair to bellow above him before recoiling into tears when the only bag of love Kashner’s character presents is a withered, very small black string-tie satchel. She is an amazing performer who keeps the audience in rapt attention with every character she plays and is truly the show-stealer. 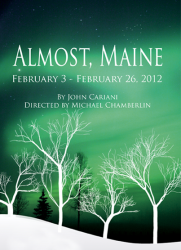 Never will you see such a unique and wonderful portrayal of love in all its formats – with real feeling and heartfelt displays than right here in is 1st Stage’s production of Almost, Maine.