Theatre Review: ‘Home of the Soldier’ at Synetic Theater 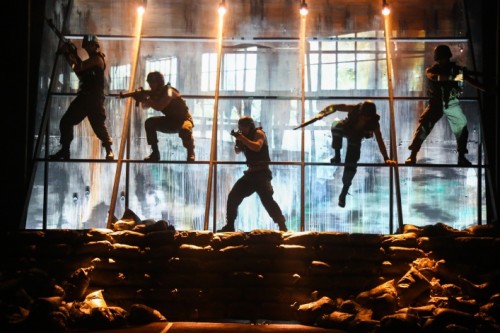 The cast of 'Home of the Soldier" at Synetic Theater. Photo by Johnny Shryock.

It’s more than a familiar story- young man goes to war for a cause, learns life lessons in the matter of what seems like seconds, and is forever changed.  Home of the Soldier, written by Ben Cunis and directed by Paata Tsikurishvili, may not be all that new in terms of general concept, but it is certainly an incredibly different way of telling a story that still needs to be heard as military forces all around the world continue to operate in conflict zones.  Production wise, it is also THE production to see in the Washington DC Metro area at the moment.

Maintaining the Synetic style of intense physical movement- and it certainly is intense in this particular production as the actors take on the role of combatant- Cunis also adds sporadic narrative dialogue to the mix.  This further allows him to set the scene and for the audience to more personally understand the indelible effect that violence has on both green and red forces in asymmetric warfare environments.  The military force and the insurgents alike can communicate what they want, what they think they need, and what they feel. 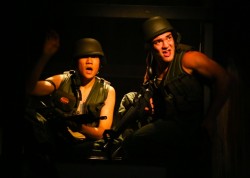 High-quality sets (Daniel Pinha), projections (the exquisitely talented Riki K.), lighting (Andrew F. Griffin), sound (the multi-talented Irakli Kavsadze, who also acts in the show), and costume (Laree Lentz) design assist the always inventive Mr. Paata Tsikurishvili to create what is, perhaps, the most is visually and audibly stunning depiction of war I’ve seen on stage.  Konstantine Lortkipanidze’s original compositions add to the sensory-overload atmosphere (in a good way).  Irina Tsikurishvili and Ben Cunis’ combative choreography is, perhaps, the finest and most innovative I’ve seen since the Synetic production of Host and Guest.

Immediate threats are portrayed with astounding realism (for example, the explosion of an IED, a mainstay in the insurgent’s toolbox of modern warfare tactics) while still maintaining the abstract theatrical presentation that Synetic has perfected in past shows.  The few and far between light and quiet moments, such as a creative celebration of a soldier’s birthday in a land far from his home, are also handled to perfection as the mood shifts.  However, these moments too are broken up quickly- as is common in counterinsurgency-focused war where the security situation is nearly always dynamic rather than static.

Informed by interviews with Georgian and American soldiers, it is theatrical-boundary pushing at its very finest.

The cast of 14, comprised of athletically agile and talented actors, does an extremely commendable job bringing the soldier and insurgent’s reality to life with a great sense of purpose.  Though there is not a weak link among the bunch, several cast members deserve particular mention.  First and foremost is Vato Tsikurishvili.  Long time Synetic actor and son of Irina and Paata, Vato proves he is well-deserving of the spotlight and can carry virtually an entire show on his shoulders.   As the Son, a young man who joins the military to rescue his commanding officer Father (the very strong Irakli Kavsadze) who has been imprisoned by a group of insurgents, Vato embodies the tormented yet purposeful soul on a mission.  Vato’s emotion and commitment is palpable in two particular scenes- as he remembers his Father getting captured (which the Son witnessed during a videochat with his Father) and as his mission comes to a conclusion (the details of which will not be spoiled here). 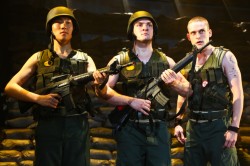 Other standouts include Jodi Niehoff (Native Mother).  As the leader of an insurgent group that is determined to defeat the occupying enemy which, under the guide of nation-building, has also caused immense physical destruction during bombing raids and the like, Mother’s motivation and intent to engage in warfare to protect her native land is a personal one.  Niehoff’s intense and committed stage presence allows the archetypal character to be presented in a full, realistic, and well-understood way.  This is most evident when she videotapes her prisoners to achieve her political objective of ousting the enemy.

Joseph Carlson (Drill Sargeant/Sarge) captures the military ethos with his precise performance.  He ensures the audience realizes that though he is mission-driven, he still cares very much for his men.  Zana Gankhuyag more than proves he is ready for the Synetic Mainstage (having previously appeared in a teen production) with his portrayal of Kid.  Taking on the role of a young, green soldier whose life ends much too soon, Zana makes a more than valuable contribution to the ensemble with his intense death (and after-death) scenes.  As a Native Sniper, Kathryn Conners adeptly portrays a young captured insurgent whose information is key to allowing the Son to find his Father.  Conners carefully treads a fine line between being too sympathetic and too harsh as her character is faced with a difficult decision.

Paata Tsikurishvili has made the astute decision to set this show in an unstated warzone involving two unnamed forces.  It could be Iraq, it could be Afghanistan…it could be somewhere else.  It doesn’t really matter. And that’s the point.  War, no matter the place and time, has a profound impact on the human condition and though stated political objectives and human and physical terrain may change from conflict to conflict, there are several constants.  The longing for home, the pursuit of justice (no matter how it is defined), the bonds between soldiers, fear, loss, and the feeling of being mission-driven transcend nation-state boundaries.  Synetic captures these notions in Home of the Soldier and creates a production which should not be missed.  Informed by interviews with Georgian and American soldiers, it is theatrical-boundary pushing at its very finest.