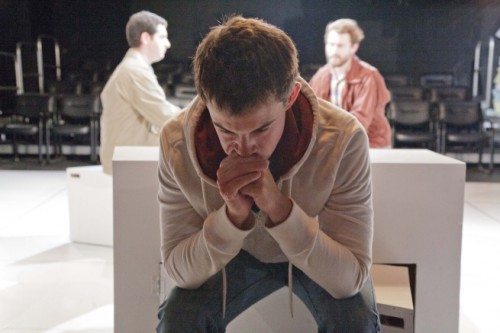 At the outset of Suicide, Incorporated, now being presented by No Rules Theatre Company at H Street Playhouse, I couldn’t help to think I was in for a sardonic, witty, and slightly off-kilter play about a company with the mission to write the most effective suicide notes possible for its clients- those who also have a mission- to end their own lives.  After all, it’s a not-so-typical supply and demand case study of how one could take advantage of an increasingly widespread socially deviant behavior in American society for capitalistic gain and be ok with it.  Interesting concept, no?  However, Andrew Hintdertaker’s script takes a left turn with an ‘unexpected’ death or two (the details of which will not be spoiled here), and the tragicomedy turns into a melodrama that involves not only the company’s clients, but also the employees.  This duality of story-telling styles within the script is somewhat jarring (whether intentional or not), but this No Rules Theatre Company production ultimately succeeds due to the exceedingly fine ensemble acting. 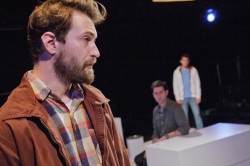 Most successful in dealing with the emotional rollercoaster scenes and tonal changes is Joe Isenberg as company founder and capitalist extraordinaire, Scott.  He displays great intensity, and at times frightening emotional rage, when dealing with his emotionally unstable clients and his two young employees (an endearing Adam Downs as Perry, and a consistently-strong and introspective Brian Sutow as Jason, who is also dealing with inner-demons).   Scott is, perhaps, the most complex, difficult and interesting (though not socially-accepted) character in the play and Isenberg brings him to life with great ease.  Even as the play takes on an air of a predictable Lifetime movie melodrama in the second half, he maintains a steady and committed level of performance.

…No Rules proves once again that it is an acting force to be reckoned with in the ever-growing DC theatre community.  This emerging theatre company is growing up nicely- in a good way.

Also noteworthy is Spencer Trinwith as Norm, a man on the brink of suicide as he grapples with the breakdown of his (very short) marriage and the choices he made following that life-changing event.  A key scene is when Norm tells Jason what really is making him choose to end his own life and Trinwith and Sutow handle it with great care and precision never losing control of it in the midst of all of the angst.   Trinwith, in particular, captures his character’s inner-turmoil in every possible way and with every inch of his body.  It’s a model of fine acting.

Rounding out the ensemble are Dylan Jackson and Howard Wahlberg.  Both play a pivotal role in shaping Sutow and Isenberg’s characters’ arcs.  Jackson, as Tommy, displays a nice brotherly chemistry with Sutow and takes on the charming slacker role quite well.  Wahlberg, as a police officer who shares life-altering news with Isenberg, balances authority and empathy in a realistic way. 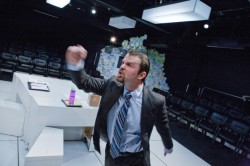 Production-wise, young phenom director Joshua Morgan (who, together with Brian Sutow, serves as Co-Artistic Director of No Rules), does an admirable job in bringing together fine acting talent to stage this production and ensuring the crucial ensemble scenes are presented in as natural and realistic of a way as possible.  Steven Royal’s minimalistic scenic and prop design captures an austere corporate environment to the tee. Andrew Dorman’s subtle lighting design also adds to the corporate-like atmosphere when necessary.  Jason Waggoner’s percussive compositions and sound design, mostly heard during scene changes, add a level of welcomed intensity to the already psychologically-heavy show.

Despite my misgivings about the script, this play deals with an important issue in American society and deserves to be seen.  More to the point, No Rules proves once again that it is an acting force to be reckoned with in the ever-growing DC theatre community.  This emerging theatre company is growing up nicely- in a good way.