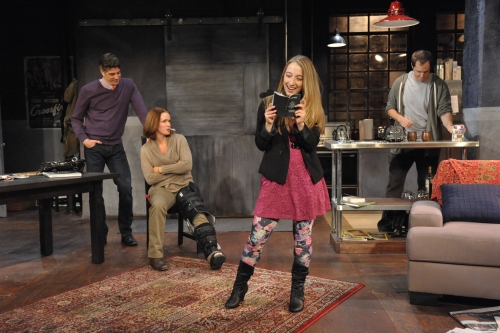 In 1994, photojournalist Kevin Carter committed suicide shortly after winning the Pulitzer Prize for photographing a starving child in the Sudan. This tragedy speaks volumes of the conflict journalists and photojournalists often face while reporting in the field—caught behind the lens, torn between the need for objectivity and basic human pathos. This conflict is at the forefront of the emotionally turbulent Time Stands Still, directed by Jason Loewith, Everyman Theatre’s season opener this year.

The play follows journalist James (Eric M. Messner) and his photographer girlfriend Sarah (Beth Hylon) as she returns, heavily damaged, from reporting a conflict overseas. Despite their seemingly glamorous careers, the couple deals with everyday issues, arguing about marriage, children, infidelity. While her editor Richard (James Whalen) begins a family with naïve Mandy (Mandy Nicole Moore), Sarah continues to sacrifice her personal life to pursue her career. When Sarah decides to return to her work – a line of work that put her in a coma, left a trail of scars down one side of her face, and required months of physical therapy – James is left having to decide whether or not to follow her.

Virtually every punch line, however subtle, got a laugh, just by virtue of effective delivery.

The theater was packed, and it’s hardly a surprise. This is a remarkably well-written, well-directed, well-staged play. Messner and Hylon, Richard’s “Sid and Nancy of journalism,” are well-matched in intensity and humor. There are moments of genuine passion between the two as they navigate the obstacles of their own relationship. Virtually every punch line, however subtle, got a laugh, just by virtue of effective delivery. Moore was brilliant as a sweet, hilariously dense young woman in love with a much older man (and Whalen played off the mid-life crisis with a humorous mix of affection, authenticity, and lust), but it was her moments of startling sincerity that were truly affecting. 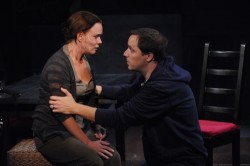 On the technical front, this play had the best set I’ve ever seen. I’m still not entirely sure how scenic designer Daniel Ettinger pulled it off, but it was a perfect replica of a Williamsburg, Brooklyn loft, right down to the glass window panes looking out into another apartment building. When it rained in the play, water streamed down the glass. The walls had an array of photographs, magazine covers, and movie posters—including 1947’s Crossfire. There were real working light switches—or the light cues were so good that they seemed to be working. The inclusion of a big-screen TV in the second act provided a view of the original version of Invasion of the Body Snatchers.

I’m not going to tell you this isn’t a difficult play to watch. Journalists are out there every day documenting the most dangerous parts of the world so that people back home don’t forget that those dangers exist. It’s a challenge to complacency, and we never see the toll it takes on their lives, as well as on our own. The only time we hear about it is when lamentable tragedies like Kevin Carter’s death occur. Time Stands Still is an intimate, stunning view of the sacrifices journalists and photographers make, not only on the front lines but also at home.

Time Stands Still is running at the Everyman Theatre, 1727 North Charles St, Baltimore, MD, through October 7, 2012. Tickets are available for purchase by calling the box office at 410-752-2208 and are available online.