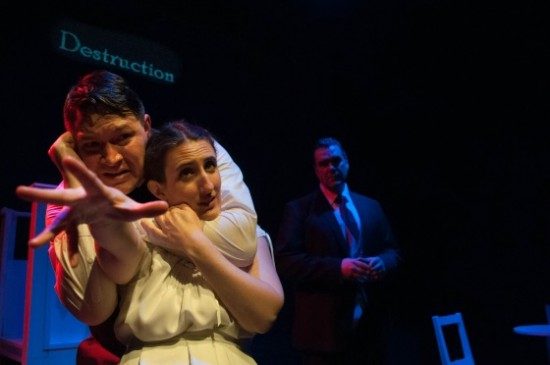 If you have ever wondered what your lover was thinking as he watched you getting ready for bed from across the room, or as he massaged your back with ever growing passion and sounds of animal intensity, then Molotov Theatre Group’s Normal, now playing at the District of Columbia Arts Center, is the show for you.

See ‘Normal’: it will make you think twice about your next blind date.

Normal, by Anthony Neilson, tells the tale of the infamous Peter Kürten, the Vampire of Düsseldorf, the pre-World War II serial killer whose 10-month murder/rape/terror spree earned him a brain dissection and a display at the Ripley’s Believe It or Not! museum in Wisconsin Dells, Wisconsin.  Though fictionalized, the script draws heavily from the study of Kürten by Dr. Karl Berg. 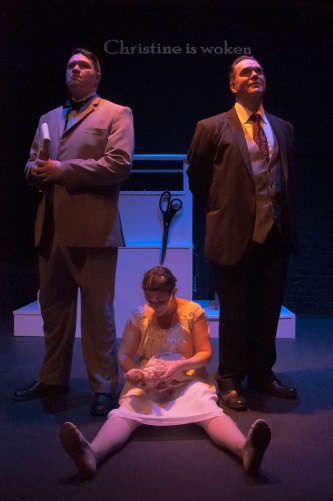 Kürten’s story is indeed the stuff of horror, the macabre, the sadistic.  Supposedly sexually aroused by the smell and taste of blood, Kürten ravaged the streets of Germany, confounding police and revealing very little in the way of a signature or pattern.  He seemingly killed anyone he had the opportunity to kill, save his wife who loved his homicidal foreplay: male, female, the very young, the old, by strangulation, by hammer, by scissor—Kürten terrorized with a matter of fact compulsion worthy of great criminal minds.

Given Molotov’s desire to continue the tradition of the Theatre of the Grand Guignol, a Paris company that specialized in the production of naturalistic horror shows and which measured its success on the number of audience members who fainted during shows, one might expect a show that is a good deal bloodier and rawer with violence.

Playing Kürten is fight choreographer Zavistovich.  He gives the “Düsseldorf Ripper” an intelligence reminiscent of Hannibal Lecter of Silence of the Lambs fame, though without the charm that a duplicitous serial killer—think Ted Bundy—needs to gain the trust of his victim.  Zavistovich’s matter of fact delivery of the shock-and-awe details of his vicious crimes gives the intimate production its power.

Normal’s tale is related through the eyes and ears of Kürten’s young defense attorney, Justus Wehner, played with strength and poise by Brian McDermott.

And indeed, Normal is more Wehner’s story than it is Kürten’s, for it is Wehner’s journey from sexually naïve lawyer to a man frightened of his own propensity for sexual violence that lies at the psychological center of the drama.  McDermott embodies the confident young man who is in over his head, becoming involved in the story’s strange love-triangle.  His “letters home,” in which he describes his emotional transformation, were performed succinctly, though a little more vulnerability might have opened the character up more to the audience.

Elizabeth Darby plays Frau Kürten (and several victims), the loving wife of Peter Kürten. Sharing her husband’s matter of factness as well as his cold bloodedness, Darby gives the character an unexpected lightness that is refreshing. 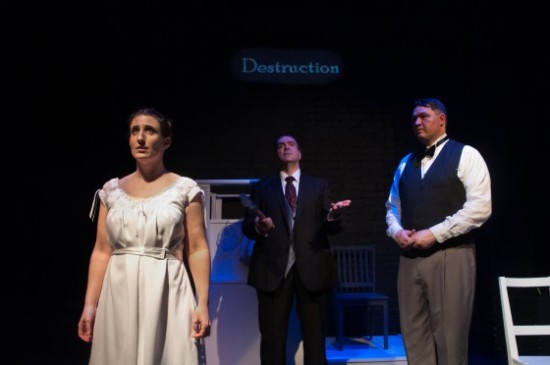 Normal is definitely not a show for everyone, as most of us prefer to avoid the darker sides of life, particularly when those darker sides become “normal,” which Anthony Neilson’s script definitely asserts with its powerful matter of factness.