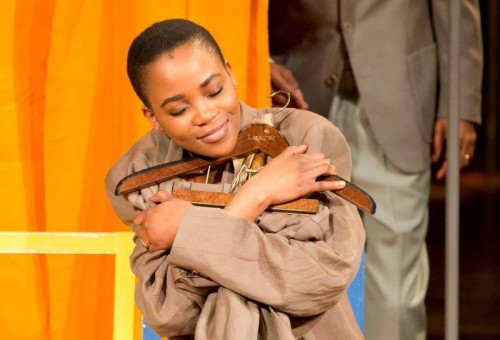 Most of the theatre-going audience in the United States has a high level of privilege and, thus, little understanding of the life of the dispossessed, life under the yoke of racial oppression, or life under the strangle of economic deprivation.

Most of us do, however, no matter what our birth or economic circumstances know what it is like to rage with jealousy or bear the burden of unacknowledged shame or suffer from a lack of forgiveness.

The initial offering of the Kennedy Center’s 2014 International Theater Festival is The Suit, a profoundly simple, beautiful story about love, infidelity, apartheid, and the need for reconciliation.

And it is a production by France’s Théâtre des Bouffes du Nord that should not be missed.

The Suit by South African short story writer Can Themba was initially adapted for the stage by Mothobi Mutoatse and Barney Simon at South Africa’s Market Theatre.

Theatre legend Peter Brook and his longtime collaborator Marie-Helene Estinenne, with music by Franck Krawczyk, have created this current version, and it is nothing short of spectacular in its gentle intimacy and gripping emotional nuance.

In the 1940s and early 50s Sophiatown, Johannesburg, birthed some of South Africa’s greatest musicians, writers, politicians, and activists.  When the apartheid government decided its black residence lived too close to Johannesburg’s whites, they organized their forced removal to Soweto.

That backdrop permeates The Suit’s adulterous tale, for it provides the context that inspires the ingenious punishment devised by the husband Philomen after he discovers that his beloved wife Matilda is having an affair with a neighbor. 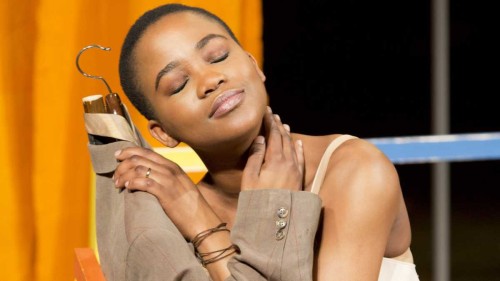 Philomen is a young black para-professional who commutes each morning from his black township to the law office where he is a legal secretary in downtown Johannesburg.  After a friend tells him that his wife has been seen with another man during the morning hours, Philomen rushes home to discover his wife’s infidelity.  The lover flees the house, leaving behind his finely tailored suit.

Philomen uses this suit as his own unique kind of “scarlet letter.”  He forces his young wife Matilda to treat the suit as if it were an honored visitor.  She must feed it, care for it, entertain it.

Ivanno Jeremiah portrays Philomen, the hard working legal assistant who struggles to come to grips with his feelings of betrayal and anger.  Whether joyously watching his beautiful wife sleep or flashing intense rage when Matilda refuses to submit to his bizarre punishment, Jeremiah engages the audience in the humanity of Philomen’s dilemma.

Nonhlanhla Kheswa plays Matilda, the woman who married too young and who now dreams of fulfilling her life as a singer.  Not only does Kheswa embody the deep longing of Matilda, but her voice is truly a blessing.  Each time she offers us a song we yearn for her dream to materialize.

…nothing short of spectacular in its gentle intimacy and gripping emotional nuance.

And it is that artistic yearning for expression, of self and of community, that lies at the heart of The Suit’s deep resonance.  As Matilda says herself as she introduces the play’s crescendo song, “This is for everyone who has a dream they cannot fulfill.”

Jordan Barbour rounds out the cast of actors, with delightful turns as both the chief narrator in the prose-in-performance theatrical event as well as a host of other characters, male and female.  His versatility and joy is palpable.

Accompanying the three member ensemble is a musical trio: Arthur Astier on guitar, Mark Christine on piano, and Mark Kavuma on trumpet.  Krawczyk’s score follows the story’s action throughout, and this trio lends the music a delightful presence.  They also join the actors during several scenes, along with several audience members, as Matilda’s search for personal realization nears fulfillment.  The comic sensibility of actors and musicians alike gives The Suit its marvelous enthusiasm and delightful tone.

With the three directors, they have created a scenography that is wonderfully simple and evocative.  A rainbow of chairs and tables provide a child-like landscape upon which the clean-cut gray suit constantly resides.  The suit looks over us like a disapproving uncle.

We want more than anything to forget that uncle: to once again romp like children in the colorful garden of delight; but even though we can hide that suit, however elegant, behind blankets and blinds, we know that those who haunt us–those in authority–have the power to bring that suit to the fore whenever they wish.

It is that awful knowledge and the eternity it ominously invokes that leaves with us as we exit the theatre to venture home.

The Suit plays at the Kennedy Center, 2700 F Street, Washington, DC through March 13.

For tickets and info about The Suit click here.