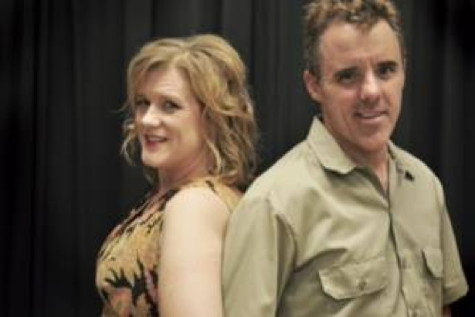 Take a break from the summer heat, humidity and rain by coming to the Rockville Musical Theatre’s musical production of The Best Little Whorehouse in Texas being performed at the F. Scott Fitzgerald Theatre in Rockville, Maryland.  This high energy musical, produced by Andrew R. Dodge and directed by Duane Monahan, is filled to the brim with good ole’ fashion country dancing and light-hearted tunes sure to bring a smile to your face and a little foot stomping action to your feet.

As the title suggests, the story takes place in small town in Texas where providing “quality companionship and services” to the men of the town is as common as paying taxes and as “hush hush” as tax evasion and money laundering. It all began in the 1930s when Miss Wulla Jean, played by Jessica Graber, started the business in a grand ranch style house on the outskirts of town where men could partake in sexual favors for a small fee. The house becomes known as “The Chicken Ranch” when one loyal customer tries to barter for services hoping to receive sexual favors in exchange for a chicken!

Even when Miss Wulla Jean retires and leaves “The Chicken Ranch” in the hands of the no nonsense Miss Mona, played by Zoe Alexandratos, business continues to thrive. As Miss Mona says, “It’s just a Lil’ Ole Bitty Pissant Country Place” where “nothing dirty’s going on.”   Miss Mona and her assistant Jewel, played by the talented Megan Evans, work hard at managing the house of working girls and recruiting new-comers Shy (Jackie Rogers), and Angel (Kelly Dobkins) until an over-zealous news reporter Melvin P. Thorpe, interpreted by Jeff Rathner, does everything in his power to shut down “The Chicken Ranch” and send the girls on their way for good. As the story unfolds we see a quiet town and its humble residents become exposed revealing unspoken feelings of love, hidden political agendas, inner-most thoughts of self-doubt and unachieved dreams.

The cast is large consisting of a large ensemble of working girls, townspeople, and boys ensemble of football players in addition to supporting actors Paul Loebach, playing the part of the foul-mouth southern good ole’ boy Sheriff Ed Earl Dodd, John Brown portraying the patriotic governor, Jason Damaso as Senator Wingwoah and Gene Ridberg as Mayor Rufus Poindexter.   Supporting actress Jessica Graber shines in her role as Doatsey Mae, a waitress in the local café. Her voice is astounding, summoning applause and I am sure respect and admiration from audience members. Her solo song entitled “Doatsey Mae” is well delivered and is a highlight of the show.

Well-choreographed dance numbers by Duane Monahan include the boys ensemble performance of “ The Aggie Song,”  “The Sidestep” performed by the Governor, the Senator, Melvin P. Thorpe and the townspeople, and “24 Hours of Lovin” performed by the girls ensemble. The dancers don’t miss a step and stay right on beat with the fast-moving rhythms of the orchestra under the direction of John Marlowe.

Of importance is the elaborate set designed by Maggie Modig. Numerous pieces were created to accommodate the changing scenes. Under the direction of master carpenter Steve Leshin, what seem to be well crafted detailed oriented fixtures grace the stage providing the perfect back drop by adding substance to well directed scenes.

Running Time: hour and a half with a 15 minute intermission.