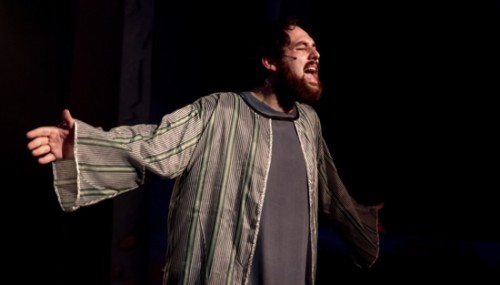 The 1971 controversial hit musical Jesus Christ Superstar is hitting the stage and impressing audiences at the Kensington Arts Theatre.  The classic musical, featuring pieces written by the well- known Andrew Lloyd Weber, is being performed by an exceptional cast directed by Craig Pettinati and produced by Jon Nunemaker.

The story provides an unorthodox inside glimpse into the last days of Jesus exploring political views, interpersonal relations, and a cultures response to a man claiming to be the Messiah.

Act 1 begins with a troubled Judas, played by Ryan Burke, singing “Heaven on Their Minds.”  In this piece, Judas makes his opinion known regarding the direction of Jesus’ plan for his people.  He thinks Jesus has gone too far and put him and the other apostles in danger.  Burke has a dominate stage presence and strong projecting baritone voice that is nothing short of awesome.

The ensemble of townspeople liven the show with song and dance performing “What’s the Buzz” an energetic number introducing Jesus to the scene.  Jesus, played by Jesse D. Saywell, reveals his unconditional love for mankind in the scene by embracing the town prostitute Mary Magdalene, portrayed by Kim Murphy, and reprimanding the people of the town for being so judgmental.  Saywell and Murphy are a dynamic duo coming together to show that unconditional love changes the heart.  Their voices are simply inspiring. Murphy’s solo “I Don’t Know How to Love Him” is heartbreaking as we see a transformed women face feelings of true love for the first time.

In response to “the entire buzz” the priests, Caiaphas (Gabriel Macedo), Annas (Christopher Overly), as well as other respected priests collaborate to devise a plan to eliminate Jesus who they fear could destroy their current government and overthrow the king.  Since it is decided that Jesus must die, the priests look toward their only inside source for help to carry out the devious plan.  Preying on Judas’s jealousy and desperation, the priests gain an ally by offering to pay Judas for insider information that will lead to the capture and death of Jesus.  The priests are a well-developed vocal trio.  They are an entertaining group skilled at blending the art of acting and singing.

Act 2 begins on a somewhat quiet note as Jesus and the apostles engage in the last supper.  In his role as Jesus, Saywell is able to showcase not only his tremendous tenor voice but his ability to portray both the gentle loving side of Jesus as well as the angry, disillusioned Jesus that appears towards the last days.  As the story continues, we are introduced to Pontius Pilate, interpreted by Grant Saunders.  A perfect fit for the role, Saunders shows us a conflicted sympathetic Pilate that is sure to surprise.

My favorite scene of the show was Gabriel Macedos’ performance as Herod.  Herod and his “girls” bring comic relief and upbeat song and dance to an otherwise serious second act with their rendition of “King Herod’s song (Try it and See).”  The scene continues with the heart-wrenching capture and crucifixion of Jesus.