Opera Review: ‘Lost in the Stars’ presented by Washington National Opera at the Kennedy Center 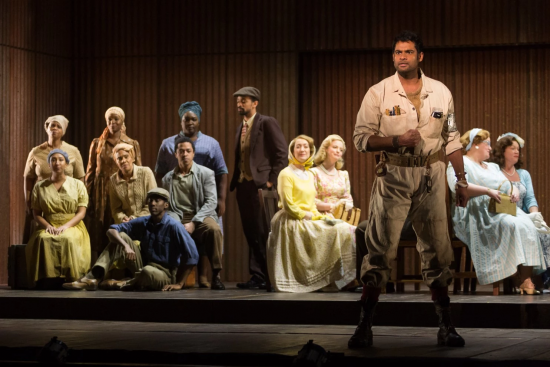 The biblical proverb instructs parents to “train up a child in the way he should go,” with the promise that “even when he is old he will not depart from it.” But what should a faithful parent do when such a proverb proves itself true in the worst possible way, in a society that promises no reward for adherence, only a life of relentless injustice, destitution and crippling fear—a life where God is elusive at best, and where law breaking seems to offer the surest way out?  This question looms over the Washington National Opera’s heart-wrenching revival of Kurt Weill’s 1949 musical production, Lost in the Stars, now playing at the Kennedy Center’s Eisenhower Theater. This powerfully delivered production, based on Alan Paton’s popular novel, Cry, the Beloved Country, and directed by Tazewell Thompson, re-asserts its prevailing emotional and social relevance for a 2016 Washington, United States, and world.

…this production brazenly leads the audience into the darkest of doubts, but not without offering a much needed glimmer of hope in the promise of reconciliation.

Set in the summer of 1949, Lost in the Stars follows the journey of black South African Anglican priest, Stephen Kumalo, as he leaves his village home for Johannesburg to locate and restore morally wayward family members. His son, Absalom, had left for the city years before to find a better livelihood, but instead, defeated by a cruel caste system and inescapable cycle of poverty, and at the urging of unscrupulous friends, turned to a criminal act in hopes of securing a future for his beloved girlfriend, Irina, who is pregnant with their first child.  But when things go horribly wrong, Absalom retreats to his father’s teaching in a final attempt to make things right and find strength. Meanwhile Stephen, overwhelmed by grief and outrage, is driven to doubt every tenant he had ever espoused.

Eric Owens, with his beaming ear-to-ear smile and deep, rich baritone, steps confidently into the role of Stephen, exuding a warm, reassuring presence in songs like “Thousands of Miles” and “The Little Gray House.” Owens seizes upon his full 2 hours and forty minutes of stage time to capture every emotion along Stephen’s tumultuous transformation from an unshakable believer to a broken and grief-stricken agnostic, signaled by “Lost in the Stars.” Meanwhile, Manu Kumasi takes a burdened Absalom in the reverse direction, presenting first a likeable, but irresponsible and impulsive prodigal, but infusing his character with increasing measures of heartbreaking remorse as his tragic circumstances drive him back to refuge in the faith of his father.

Soprano, Lauren Michelle shines brightly in her portrayal of a heavily burdened Irina. Her soft but penetrating voice singlehandedly carries the full emotional heft of this story to the very back row, especially in “Trouble Man” and “Stay Well.” Tenor, Sean Panikkar was another vocal standout as the Leader, a troubadour of sorts who sets scenes, introduces characters, and offers more removed reflections on events as they unfold. Panikkar’s Leader, dressed in a khaki military jumpsuit, stands vigilant over each scene, regularly stepping in with his powerful, ringing voice to fill in details or lead the chorus in reaction, as in “Cry, the Beloved Country.”  Wynn Harmon delivers a compelling performance as James Jarvis, a stern white traditionalist turned contrite reformer, and Cheryl Freeman offers this production’s single greatest source of levity, with her raspy voice and playful dancing. In all, this robust 55 member cast is a force to be reckoned with, successfully recreating a lively, but fear-laden “beloved country.” They are confidently backed by an industrious Washington National Opera Orchestra, conducted by John DeMain.

All scenes, whether unfolding in Stephen’s rural village, Absalom’s Shantytown, or the plush Jarvis home, are walled-in by Michael Mitchell’s towering corrugated steel set, at least two stories high—a chilling reminder of the isolating effect of inequality on the entire society. A smoothly executed fly system even turns the curtains to steel, but also supplies subtle light fixtures and other suspended pieces that accentuate each scene. Stark and sometimes motile lighting by Robert Wierzel does most of the work of filling in for a scant set, to conjure settings as varied as a moving train, a seedy bar and a soulful African country church.

Rooted in the earthy vivacity of the Zulu musical tradition, Lost in the Stars traces a constellation of meaning in a harrowing night sky of injustice, fear and loss. Its story is sadly still not far from reality for many living in a still deeply segregated 2016 United States and Washington, DC—ironically a group of people who are least likely to attend the opera. From pulsing choruses to mournful call and response, this production brazenly leads the audience into the darkest of doubts, but not without offering a much needed glimmer of hope in the promise of reconciliation.

Running Time: Two hours and 40 minutes with a 20 minute intermission.