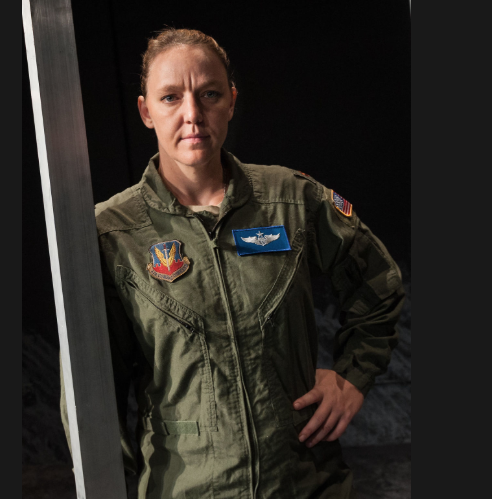 “Grounded” hit the stage earlier this month and I was lucky enough to get a chance to chat with the star of the one-woman show award-winning actress Kerry Cahill. It’s good to have friends in high places.

This one-woman journey is just that a challenge,” says Cahill.

Cahill is not only performing in “Grounded’ a collaboration between the Southern repertory theater and Loyola’s University-Lower Depths Theatre, but she has recently joined the cast of the hit TV show “The Walking Dead.”

In an exclusive interview with MD Theatre Guide, Cahill says, “I am blessed this year; it has been a great year for me professionally and personally. Thrilled! Just thrilled to join this great show.”

She was tight-lipped sharing too much about her character in the show with the MD Theatre Guide.

“Grounded” Written by George Brant and Directed by Larissa Lury is the regional premiere of the show.

Cahill plays a fighter pilot who is sidelined due to an unexpected pregnancy. She is reassigned to operate military drones from a trailer in Nevada. Cahill nails this role. She plays the nameless female pilot with confidence. She has mastered the ability ‘to be one of the guys,’ giving off an air of confidence, while at the same time also being a little cocky.

Imagine being the decision maker behind hitting one button that could obliterate hundreds even thousands of people. Cahill finds that balance. She is a hot- shot pilot in a male dominated world, but rarely looks phased.

“I am always looking for my next challenge as an actress. This one-woman journey is just that a challenge,” says Cahill.

Her character seeks out terrorists during the day and then heads home to her family at night. Soon she starts to struggle to see the lines between the two life roles. She is soon torn between the desert in which she lives and the one she patrols half a world away.

Cahill says, “I am thrilled to be playing this role. Working with the Director Larissa Lury is amazing. The show is both physically and emotionally draining, it’s just me out there on the stage, there is no down time.”

It’s the same feeling for the audience you can’t miss a beat through this play.

I recently interviewed Cahill about her role as the national spokesperson for AMVETS. She told me she relates to many of the issues raised in “Grounded” that veteran’s face. Cahill’s father a veteran was shot six times during the Fort Hood, Texas shooting in 2009.

Cahill joins the ranks of actresses like Anne Hathaway in playing this strong, defiant yet at times torn character; Hathaway is rumored to be adapting the play for the big screen.

“I feel a little bit nostalgic, says Cahill, “I am Loyola University alumna, and for the first time and now I am performing professionally on the same stage that I learned on as a freshman. It feels surreal, to say the least.”