Theatre Review: ‘Someone is Going to Come’ by Scena Theater at Atlas Performing Arts Center 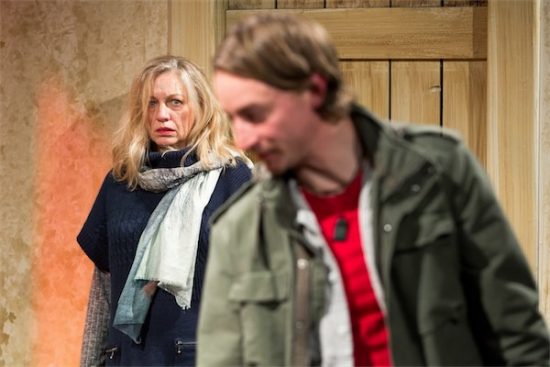 Nanna Ingvarsson and Joseph Carlson in ‘Someone is Going to Come.’ Photo Credit: Jae Yi Photography

What does it mean to be alone? Is it possible to feel most alone with someone right beside you? Scena Theater explores these questions with their most recent production, “Someone is Going to Come.”

By turns farcical and menacing, the play defies easy classification.

The show opens on a man and woman, identified to us only as He and She, celebrating the purchase of a beach house where they can be alone together at long last. While we do not get almost any specific information about their past, there seems to be a shadow of anxiety over both of them. Barely moments after joyfully celebrating their new home and the possibilities it presents, She looks worriedly at the vast sea in front of their house and ominously proclaims that someone is going to come and ruin the new found peace of mind they have only just finally achieved.

And come someone does – the Man who sold them the house. He innocently claims to want to meet the couple that purchased his grandmother’s house but looms darkly as the couple begins to discover that the house and situation in which they have placed themselves may not be the idyllic answer to their problems that they had hoped.

Written by prolific Norwegian writer Jon Fosse, directed by Scena Founder and Artistic Director Robert McNamara, and presented in partnership with the Royal Norwegian Embassy, this marks the Washington area premiere of “Someone is Going to Come.” By turns farcical and menacing, the play defies easy classification. David Bryan Jackson (He) deftly transitions from the comforting figure to dissolving into his own neurotic spiral.

His partner She, played by Nanna Ingvarsson, delivers a performance that gives the audience a feeling of the complex past that her character has experienced, although it is never articulated. Joseph Carlson (the Man) is both comedic and suspect – his initial impression as a harmless yokel perhaps deceiving. The one thing all three characters share is the propensity to verbally repeat themselves; as if they are trying to convince themselves of the very ideas they espouse.

The production is strengthened by its strategic use of set, lighting and the theatre itself. The small venue assists in the trapped, claustrophobic feeling that begins to overwhelm the couple, while the set designed by Michael C. Stepowany is laid bare in certain places, mirroring the inability of the characters to hide from their pasts. The lighting designed by Marianne Meadows effectively conveys the passing of time and the music that plays before and after adds to the eerie ambiance that lingers over the events (Sound Design by Denise Rose). Costumes were effectively designed by Alisa Mandel.

Advisory: The show has very brief adult language and is most appropriate for audiences over 18.

“Someone is Going to Come” is running now through February 5th at Atlas Performing Arts Center, 1333 H Street, NE, in Washington, DC. For tickets, click here.