Theatre Review: ‘Bud, Not Buddy’ at the Kennedy Center 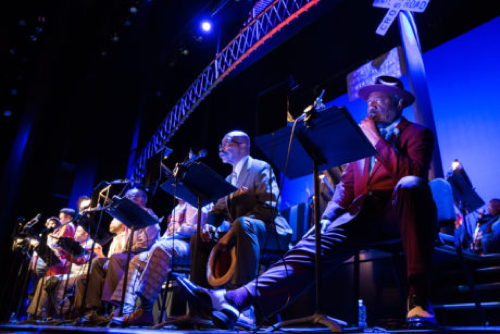 Sometime when you set out to find someone else, you find yourself along the way. That is a large part of the story of “Bud, Not Buddy,” based on the Newbery Medal Award winning book by Christopher Paul Curtis, now playing at the Kennedy Center.

The production takes the opportunity to not just entertain, but engage and educate the audience…

Set during the Great Depression, Bud finds himself an orphan after his mother dies. After spending time in an orphanage and with an unfriendly foster family, he goes on the lam, looking for the man he believes to be his father. He meets a few characters along the way, before finally meeting the biggest character of all, Herman E. Calloway; bandleader, bassist and, Bud believes, his father. While Herman doesn’t want anything to do with young Bud, the members of his band decide to give him a chance and try to get to the bottom of things. What ends up developing is a family, just not in the way that Bud expected.

The Kennedy Center’s production of “Bud, Not Buddy” is imaginative and fun, taking a reader’s theater/concert style approach to telling the story. While the show is geared towards children, the poignant story, comedic moments and toe-tapping music make it enjoyable for all. The older members of the crowd might recognize Frankie Faison as Herman E. Calloway from his comedic (“Coming to America,” “White Chicks”) and dramatic (“the Wire,” the Hannibal Lecter films) roles in film and television and other adults will recognize cast member Roscoe Orman (Jimmy, multiple roles) from his lengthy tenure as Gordon on “Sesame Street.” The real standout is Justin Weaks, playing Bud. He hits all of the right notes, comedic and serious, infusing a character who has experienced real hardship and sadness in his young life with joy and pluck.

The production takes the opportunity to not just entertain, but engage and educate the audience on topics as varied as poverty, racism, grief and forgiveness. Along with the standard playbill, audience members receive a short performance guide; this is designed to help the younger members of the audience follow along with the themes and vocabulary of the show and asks questions to encourage thought and discussion at the performance’s conclusion.

The presence of the lively jazz score takes an already strong story and enhances it even further. The band plays on stage and they and the music are almost another character in the story. The original music was written Terence Blanchard, a prolific musician who has composed and played in various high-profile projects such as Disney’s “The Princess and the Frog.” The set (designed by Misha Kachman) is simple yet effective and works seamlessly with the impactful lighting (designed by Dan Covey) to make a cohesive visual presentation. The costumes (designed by Jen Gillette) are well put together and historically appropriate.

Advisory: This show is recommended for ages 9+.